In an earlier blog post, I wrote about the return-on-investment of condition based maintenance (CBM) for wind turbines. For those who would like a primer on CBM and the value it provides, start there. But for those who want to learn more about the nitty gritty of CBM, keep reading (or send this to your friendly, neighborhood engineer.) 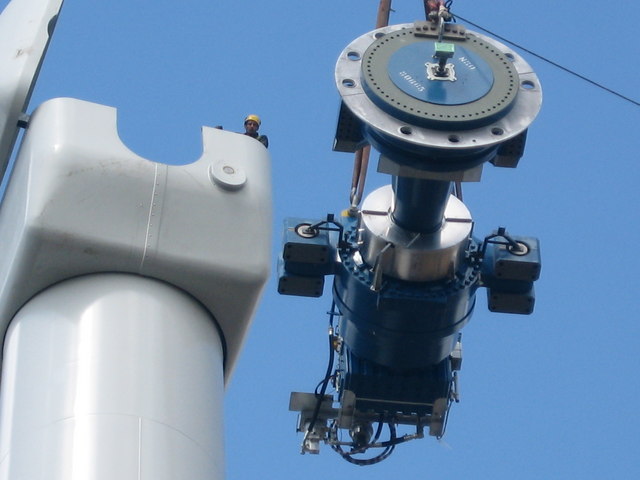 There are a number of commercial condition monitoring (CM) systems that provide diagnostic capabilities for wind turbine gearboxes. While useful for asset management and logistic support, the current products are deficient in two major areas. First, their ability to define a level of damage is immature (e.g., how bad is bad). Second, these systems have limited ability to predict when a component will go bad (e.g., the damage threshold).

The ability to define a damage threshold is complicated by the metric, or condition indicators (CI), used to identify component health. For all but shaft order 1 vibration (the vibration associated with 1 x the rotation rate of a shaft, which has a physical meaning), there are rarely defined limits. For example, there is no physical limit for the gear CIs, such as residual kurtosis, or any other CI. In general, when a CI value is “large” (e.g., residual kurtosis greater then 8), it is assumed that the gear is bad.

Additionally, for many components there is no single CI that works for all failure modes, making it difficult to compare relative failure across components. For bearings, there are condition indicators for the inner race, outer race and roller element. For gears, which have at least 6 different failure modes, there are numerous CIs that work for some failure modes, not but all. While side band modulation can detect a gear misalignment, it is ineffective for a soft tooth. Similarly, residual RMS (root mean square) work well for gear tooth pitting, but is not effective for an eccentric gear.

One technique that has been successfully used in aerospace CM systems is the Health Indicator (HI). The HI fuses n number of CIs into a single, common indicator of health. For example, the HI can range from 0 to 1, where:


The HI can be designed to have a constant false alarm rate. This is initially set by sampling nominal component data, then using statistical techniques to model the data, account for CI correlation, and ultimately, ensure that a when the HI is greater than 1, it is appropriate to do maintenance. This methodology is useful because, instead of asking the question “when is the component bad,” it asks the question “when is the component not good.” It enables operators to see when components are going bad and take proactive steps to avoid more costly damage.


The Value of Prognostics

The prognostic is also dependent on a fault model. Damage of rotating equipment comes from fatigue, which is a function of torque. It’s no surprise that a wind turbine will fail sooner when operating under high loads (e.g., large torques). Paris’s Law relates the rate of change of damage (e.g., crack length) to cyclic loading. In most cases, the parameters needed for Paris’s Law are calculated in the lab. NRG Systems has developed a patent-pending methodology to estimate the unknown parameters by reconstructing them from a state observer. Instead of crack length, a surrogate for damage, the HI, is used. By integrating Paris’s Law, it is possible to estimate the cycles, or time, remaining until the HI is 1.

As a result, this prognostic (or measure of RUL) provides valuable information to operators about when components might go bad and under what conditions. This allows for real-time decision making, such as curtailment under high winds to extend the life of a component. Conversely, the RUL can be used to perform opportunistic maintenance. For example, if a maintenance crew were on-site to tend to more costly damage, they could do well-informed preventative maintenance during the same maintenance event, saving time and money down the road.


The Future for Wind

While these systems aren’t there quite yet, there’s much we could learn from other industries to continually lower the cost of operations and maintenance and strengthen the competitiveness of wind.

Dr. Bechhoefer is lead systems engineer at NRG Systems. He is an acknowledged specialist in the field of rotor dynamics and wireless sensor technology who holds 16 patents and has published more than 40 papers.

Bechhoefer, He, Dempsey, "Gear Health Threshold Setting Based on a Probability of a False Alarm," 2011

Bechhoefer, Clark, He, "A State Space Model for Vibration Based Prognostics," 2010