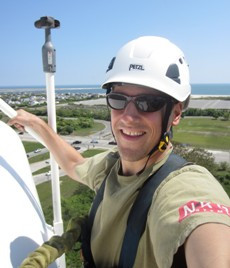 Recently, two Renewable NRG Systems employees traveled to Hempstead, N.Y., to install a Wind Iris Lidar on a Northern Power Systems wind turbine. From their post on the small nacelle platform, Evan Osler and Alban Jehu could see planes taking off from JFK Airport just a few miles in the distance.

Northern Power purchased the Wind Iris to perform power curve testing and validation of the NPS 100 turbine platform. With data compiled by the Lidar system, Northern Power will be able to determine the impact of different upgrades on wind turbine power performance, as well as accurately characterize how the turbine anemometer and vane measurements are influenced by the rotation of the blades and the structure—known as the nacelle transfer function (NTF).

“We chose the Wind Iris because it is a flexible tool for measuring upstream wind speed,” explained Chris McKay, director of product management at Northern Power. “We can accurately verify the power curve of wind turbines without the additional cost and permitting challenges of installing a separate meteorological tower.”

Evan Osler and Alban Jehu work to configure the Wind Iris Lidar on the turbine’s nacelle.

“With the Wind Iris, we’ll be able to quickly determine how the upgrade packages we are designing will affect performance,” added McKay. “The hard data will show customers how they can benefit from those upgrades.”

Wind Iris is manufactured by Avent Lidar Technology, a joint venture between U.S.-based Renewable NRG Systems and France-based Leosphere. The first Lidar dedicated to turbine performance evaluation, it uses pulsed Lidar technology to measure horizontal wind speed and direction at distances of 40 to 400 meters upwind of the turbine. It has been specifically designed for repeat installations. 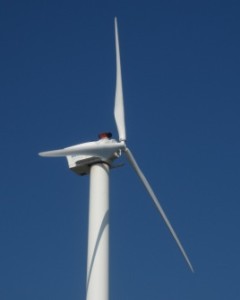 Newly installed, the Wind Iris is ready to begin measuring the free stream wind speed ahead of the turbine.