As I write, members of the Congressional Super Committee have just succumbed to failure. The pundits are saying two things: that markets around the world are waiting for the U.S. to take the lead by enacting meaningful deficit reduction—but that we shouldn’t hold our breath. Reform will have to wait until the next election.

So, we’re just supposed to wait and do nothing? Well, here’s an idea Congress can and should act upon right now: let’s eliminate the $40 billion in permanent tax breaks currently enjoyed by the oil, natural gas, and coal industries. Either we are serious about deficit reduction, or we are not. Both rational deficit reduction as well as energy policy would indicate that if the federal government continues to prop up one energy source, it should do the same for others—or for none.

Two weeks ago, a bipartisan bill to extend the Production Tax Credit (PTC) for four years was introduced in the House of Representatives.  The PTC is a credit of 2.2 cents/kWh for electricity produced by utility-scale wind turbines that will run out at the close of 2012.

Around since 1992, the PTC has been a key driver of growth in the wind energy industry, but has been enacted for as little as a year or two at a time and sometimes allowed to expire. When it’s on, we see tremendous job growth, expansion of manufacturing capacity, and innovation. When it’s off or in jeopardy (as it is now), new installations drop off dramatically and people lose their jobs.

Today, while Congress debates an extension for the PTC yet again, the well-established fossil fuel industries are enjoying long-term, permanent subsidies written right into the tax code – not to mention the billions in indirect subsidies these industries receive by passing “externalizing” environmental and health-care costs, costs that are absorbed by the taxpayers. 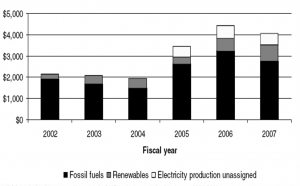 On the PTC, critics of renewable energy love to ask: when will wind stand on its own two feet? To that, I’d answer: when fossil fuels can—when the true costs of fossil fuels are factored into the price of electricity.

If the federal government continues to prop up one energy source, it should do the same for others—or for none. Without artificial price supports, wind and other renewable sources would be the economical choices in the near and long-term.

For deficit reduction, job creation, and environmental protection, it’s time for Congress to stop picking winners and losers, and allow all sources of energy to stand on their own two feet.