The NRG BP60 is a drop-in replacement for the BP20 Barometric Pressure Sensor. There are several improvements introduced in the BP60, but perhaps the most important is the introduction of native temperature-compensation.

The performance improvement can be dramatic in situations with rapid temperature swings, including diurnal cycles such as the one shown in the example below from NRG’s internal BP60 field test. At the beginning and end of the time series, the BP20 (dashed yellow) agrees with the cohort of three BP60s fairly closely (approx. ± 1 hPa). However, during the daytime, there is a pronounced divergence, with the BP20 reading approximately 5 hPa higher than the BP60s as the temperature increases about 20°C over a five-hour period, from just over 2° to 22°C (solid teal). The BP60 cohort continues to read within ± 0.5 hPa throughout the same period.

The BP60's onboard temperature compensation improves the sensor's overall measurement accuracy relative to the legacy BP20, enabling improved estimates of future air density and annual energy production, and more reliable forecasts on operational solar and wind farms as well as in general meteorology use cases. 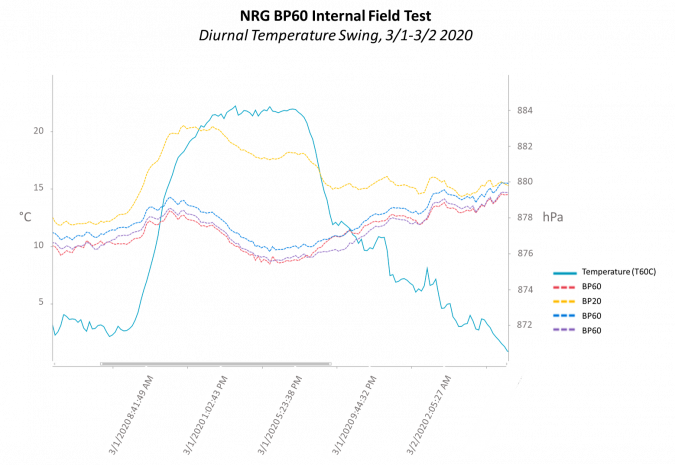 As a Senior Product Manager, Rob's focus is on wind resource assessment and remote sensing technologies. He first became interested in renewable energy while studying in Denmark during his junior year of college, where he witnessed firsthand the impressive changes the Danes have made to their energy system. Rob wants to bring products to market that make it easier for the world to transition towards greater penetrations of renewable energy.  He writes about industry trends and how NRG’s products address our customers’ challenges.