Safe power should be the norm 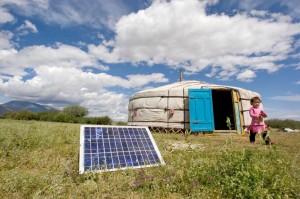 The evolution of names

Over the years, wind power and solar power have had a variety of names.  First, they were derisively called alternative energy, then as they became more widespread and more difficult to dismiss, the name changed to nondepletable, renewable, green, carbon neutral, and clean.  Now the term clean energy can mean just about anything since coal, with still unproven carbon sequestration, nuclear and natural gas are part of that all encompassing club.  For a time, Vestas used “modern energy” as their marketing slogan.

I would like to suggest a new word for wind and solar: safe energy.  Not only is the energy itself safely produced without pollution, but during the whole life-cycle of a wind turbine or solar panel, there is a minimum of human misery. This misery is evident in coal mining deaths, oil spill pollution, and wars over fossil fuels.

While most of us in the U.S. have lights, running water, heating and cooling, these luxuries are not enjoyed by vast numbers of people in developing countries.  They suffer at times because of that, but mostly they just make do, living every day and doing daily things with a quiet dignity.  They are marginalized and have little voice in their own countries, and are cut off from much of the modern world.

It is apparent that the First World is not going to share our most prized energy sources – liquid fossil fuels – equitably with the rest of the world.  China, India, Brazil, South Africa and a host of smaller nations are growing in terms of population, GDP and demand for energy. While climate change is widely considered a global concern, few if any countries are willing to slow their economies to combat it.


Safe power should be the norm

Safe, reliable electric power can enhance the health and well-being of communities in all countries, rich and poor. Safe power offers comfort and greater opportunities for education. (Children can’t study in the dark.) The world’s poor are owed this.  It is imperative to develop local safe energy now, and with greater effort than ever before.  Safe energy must become a top national priority in word and action.  Developing countries should no longer tolerate inefficiency and ineffectiveness in energy development.  Barriers should be removed, whether they are corrupt officials or byzantine regulations. Lives are at stake.

Patrick Strom is the sales account manager for Asia, Africa, and developing regions of the world.  He travels far and wide for NRG Systems, helping bring renewable energy solutions to emerging economies.