When NRG Systems introduced its Bat Deterrent System to the public, our marketing team needed images of bats for a range of customer-facing touchpoints, including the company website, print collateral, and tradeshow booth graphics. While this seemed like a straightforward enough task, it turned out to be quite a challenge.

Because they are nocturnal and fly, bats are notoriously difficult to photograph. The result is a dearth of high quality images that capture the fascinating and unique qualities of bats. While on the hunt for usable bat photographs, NRG was fortunate enough to connect with Bruce Taubert. Taubert, who spent his career in wildlife management, has been photographing the natural world and its inhabitants for more than 30 years. Among his frequent and favorite subjects are bats.

We spoke with Bruce to learn more about his journey to becoming a wildlife photographer, how he creates his stunning bat images, and why he is excited to be teaming up with NRG Systems. 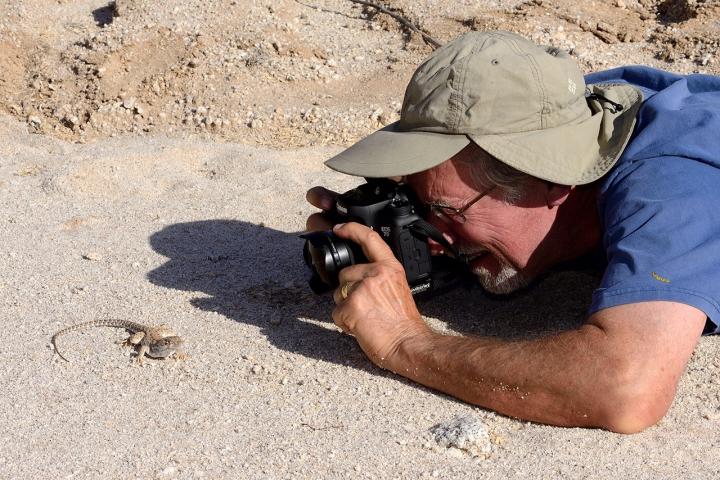 NRG Systems: When and how did you become interested in wildlife photography?

Bruce Taubert: After graduate school, I became a research scientist and then, eventually, a wildlife manager and administrator. My photographer mother gave me my first camera in the 1960s, but I did not become a serious photographer until much later. I began by reading everything I could about camera operation and photographing wildlife. I treated my photography like a job and became as proficient as I could. After improving my skills, I began to feel better about my images and like most areas of life, success breeds success. I was stimulated to continue doing my best to be a better photographer.

NRG Systems: How does your work as a photographer support wildlife conservation?

BT: During the first portion of my career, I was dedicated to helping gather enough sound scientific data to allow managers and policy makers to make decisions that benefited wildlife populations. Without reliable information, the wildlife populations that scientists are sworn to conserve will not flourish.  I soon found out that even when armed with fantastic data, many politicians and members of the public were not convinced that animals needed assistance, especially if it meant that the public had to change their behaviors. For instance, in my experience, data was never a very convincing tool to prompt land users to change how they harvest timber, graze grasses, or irrigate their lands.

Photography personalizes the relationship between humankind and wildlife and makes it more difficult to harm them! I firmly believe that photographers and journalists have done as much to conserve our natural resources as our scientists.  If my photography can relay a familiarity of our wildlife to our public, then there will be a conservation benefit.

NRG Systems: What are some of your favorite animals to photograph and why?

BT: In the past, my answer would have been “if it breathes I want to photograph it.” But, over time, I have gravitated to those critters that are less photographed and less understood. I am especially interested in photographing wildlife at night. Owls, kangaroo rats, scorpions, rattlesnakes, and the like are fascinating to me. Macro images of insects, especially moths and bees, have become a new passion for me. The wonderful pattern of bee eyes, moth wings, lizard skins, can, hopefully, spark a new appreciation in the public. I also love photographing bats. It is quite possible that my interest is more driven by the difficulty in capturing great images of these species than by the species itself, but I also realize that many of these species are less understood and therefore less in the public’s hearts and minds. I enjoy the challenge of bringing them to the forefront. 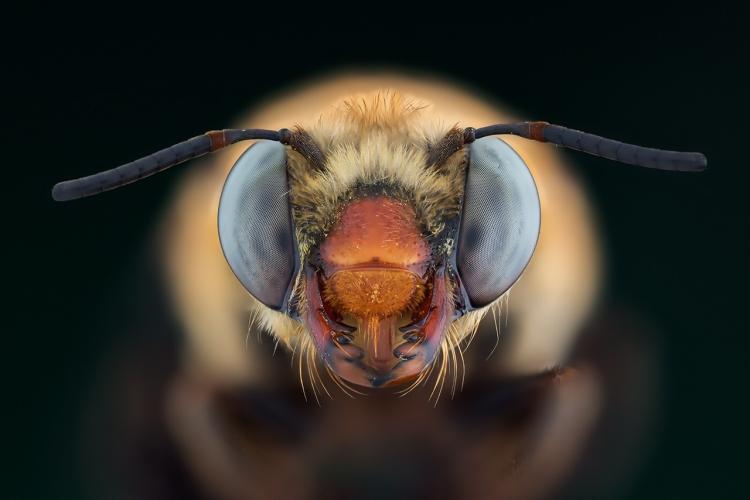 NRG Systems: Speaking of bats, how did you become interested in them?

BT: About 20 years ago, several professionals within the Arizona Game and Fish Department began researching and monitoring bats. Much of the work was conducted to help federal agencies determine the impact their actions had on the fauna and flora residing on their properties. We were doing great work but when it came to publishing or advertising our efforts, there were no bat photos. Well, there were images of bats being held by researchers, but they were not very interesting and they always showed the bats in a bad light. Of course, the first thing I did was try and determine how to get an image of an animal that lives in the dark and flies at relatively high speeds. As you might expect, there are no “How to Photograph a Flying Bat” books in the library. I contacted many of the experts, but they were either unwilling to convey their secrets or I was too dense to understand what they were doing. Luckily, I had a good friend in Florida who was doing some bat photography and he schooled me in the basics.  From there, I invented my own flight chambers, sought out the equipment I thought might be capable of capturing these creatures, and began a trial and error process. After about five years, I was able to take a few nice images for my staff’s use in presentations and publications.

While working with scientists and attempting to photograph bats, I fell in love with them. They were not dirty, rabid animals, but unique and biologically interesting. From there, I traveled to Mexico to work with bat expert Arnulfo Moreno Valdez photographing the bats of eastern Mexico. I continued on to Australia and then Nicaragua, where I assisted Carol Chambers, a wildlife ecology professor and co-director of the Bat Ecology & Genetics Lab at Northern Arizona University, in documenting her work. I made my way around Arizona photographing all but one of its 28 bat species. My “captive bat” photography morphed into taking images of wild bats in their natural habitats. 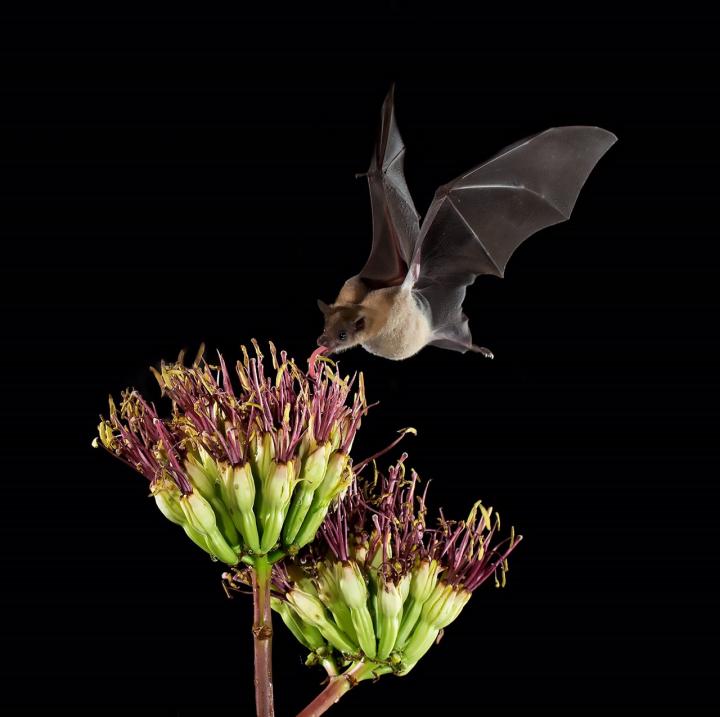 NRG Systems: What unique challenges do bats present as subjects?

BT: The real question is what challenges don’t they present? Since they fly, getting sharp images requires high speed lighting equipment. They live part of their lives in caves with all sorts of narrow entrances, nasty insects that bite, high levels of CO2 and ammonia, and are very claustrophobic. They only come out at night and, for most images, you must catch them in order to contain them for photography. In most states, if not all states, it is illegal to catch and hold bats, so I must work with appropriately licensed scientists. This was easy when I worked for Game and Fish, but after retirement it is a greater challenge. And in order to handle and photograph bats, you need to have prophylactic rabies vaccines. After you get bit, you must have “extra” injections. I know some readers will understand the pain of an injection of rabies immune globulin.

But the hard work is worth it. My images have appeared on everything from a poster for Arizona Bats that is handed out in classrooms and other public-facing institutions, to a jet belonging to the Australian Air Forces. To see my images being used by a variety of entities to promote the conservation and understanding of bats is extremely rewarding.

NRG Systems: What have you learned about bats through your photography?

BT: Considering that I am a trained fisheries biologist and was not introduced to bats until I began photographing them, everything I know about bats was learned as a result of my working with bat biologists while photographing bats. I will not claim to be a bat expert! I do understand much of their life history. I have a better understanding of how changes in ecosystems impact bats. I understand some of the various feeding strategies and all that stuff. But most importantly, I have learned how vital healthy bat populations are to maintaining healthy ecosystems. 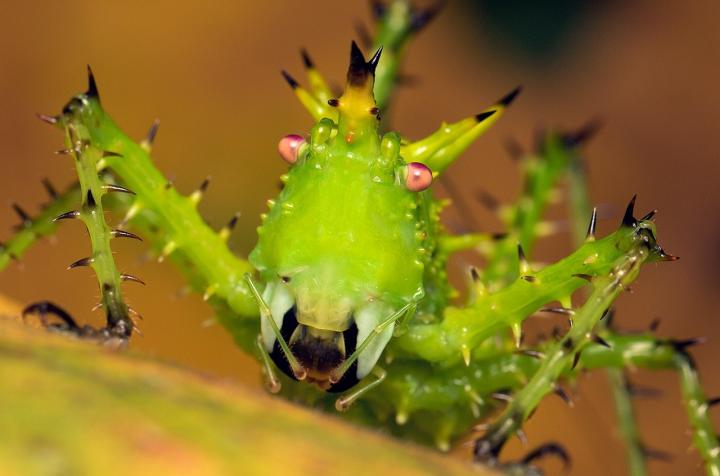 A katydid from Panama. Image courtesy of Bruce Taubert.

NRG Systems:  Is there a subject you still dream of capturing?

BT: I want to learn the skills and put my cameras in a position where I can do a better job of capturing interesting life history images. For instance, many wonderful bat photographers in South America have access to fruit eating bats and have taken incredible images of them feeding on fruits (in a non-captive situation).

I envision photographing a Pallid bat capturing a scorpion, fruit bats eating fruit, a frog-eating bat capturing a frog, a bat catching one of Arizona’s beautiful moths. There is so much still to do, so I spend a lot of time dreaming about it.

NRG Systems:  What image are you most proud of? Can you share the story behind it?

BT: I have an image of a Townsend's big-eared bat drinking from a desert pond that is very striking. This is not from the pond in southeast Arizona where many photographers go to get instructions on photographing drinking bats. The small ponds I work are out in the middle of one of the driest places in Arizona, miles from anything and rarely photographed.  After setting up my gear, I love sitting around all night watching the many species of bats drinking from this remote waterhole. Although I cannot identify all the bats I photograph (because they are not in hand), I have captured images of 10 or so species at these waterholes. There are only four waterholes within miles of where I am working, so I often wonder if the bats would be there without these manmade pools. I also have a few images of several species of Pteronotis exiting a cave in Nicaragua that are quite nice. 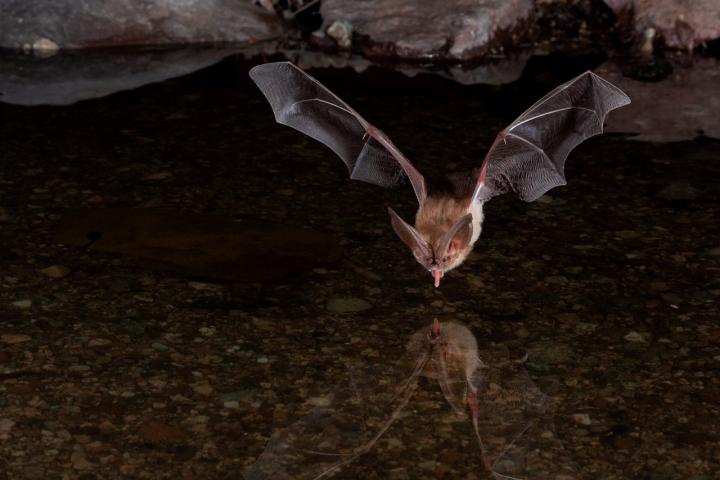 NRG Systems: What do you hope people take away from your work?

BT: A better appreciation of bats and how unique and important they are.

NRG Systems: You have very graciously allowed NRG Systems to use your bat photography to support our Bat Deterrent System. What excites you about this collaboration?

BT: Humanity has, and always will, impact the other species we share the planet with. Bats are no exception. My hope is that the bat deterrent technology NRG has developed will help the wind industry and wildlife and land managers maintain and, in some instances, save our bat populations. If bats can be deterred from collisions with wind turbines or steered away from hazardous waters and other dangerous locations, then we all benefit.

I am hopeful that NRG’s use of my bat images can help encourage decision makers to use all the tools available to them to keep bats safe. We all know how important it is to decrease carbon emissions and reduce our negative impact on the environment! We also realize that some of the fixes to having a greener society and cleaning our lands can impact wildlife. The hope is that we are intelligent enough to find a way to have our cake and eat it too. I think we are taking steps in the right direction.

To learn more about Bruce and view his portfolio, please click HERE.