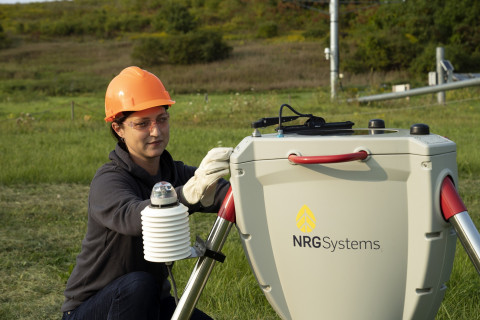 Wind resource data is one of the most critical aspects of wind farm development. While measurement hardware such as met masts and Lidar continue to evolve and improve, there are myriad situations where alternative means of data acquisition are needed to either sub-in for or complement these tools.

Vortex FDC has provided modeled wind resource data to industry professionals for over 15 years. The company, whose clientele includes some of the biggest wind developers, turbine manufacturers, and energy consultants across the globe, uses a supercomputer cluster to run a non-linear flow model that scales large atmospheric patterns down to fine spatial resolutions, generating modeled wind resource data suitable for use when measurements are not yet available. One of the company’s cornerstone products is the Vortex Large Eddy Simulation (LES) – a time series that provides data when no measured wind is available (or reliable) to characterize mean flow and turbulence.

In May 2021, Vortex introduced GapFill – a tool for LES designed to fill the missing timestamps of a measurement’s file with calibrated Vortex LES data. Marta Gil-Bardají, who leads R&D Wind Modelling at Vortex, said, “The option to calibrate 3km-resolution, long-term wind simulation Series has been available at Vortex for a long time – it is called Remodeling of Series. When we started developing GapFill, we wanted to explore the challenges and potential of calibrating LES time series, which are only one year long and simulated at very high resolution (100m). Due to the short period of a LES simulation, the calibration goal was to fill the gaps of the observations instead of extending the observations.”

GapFill was initially validated by Vortex at 39 sites where a full year’s worth of 10-minute observations was available. The validation showed that GapFill is a promising technique for increasing data availability. In fact, by combining observations and calibrated high-resolution virtual data, the GapFilled time series offers a dataset with 100% availability that fully describes one year of wind at a site. Gil-Bardají said, “GapFill was designed with day/week gaps in mind: for example, missing anemometer observations due to instrumental errors caused by a storm or icing of the sensor. That is very useful to analyze how these unmeasured days affect the statistics of the whole period.”

Earlier this year, Vortex teamed up with NRG Systems to perform another validation of GapFill, this time checking whether periods of remote sensing downtime caused by such things as remote power supply issues, unit relocation, and routine maintenance were skewing campaign results. The validation took place at test sites in Texas and Vermont and used GapFill datasets in conjunction with NRG Lidar observations. The results indicate that GapFill could be used as a check for whether missed measurement periods are altering the overall distribution of measurement at a site. They also suggested that the effect on the mean bias of 10-minutes averages appears manageable by keeping the share of synthetic wind data relatively low. NRG Data Scientist, Alexandra Arntsen, Ph.D., said, “We believe that using measurements and models together improves our collective understanding of the wind resource at a given project site and enhances the analytical capacity at our fingertips. I think there is room to increasingly leverage observations in models and models in observation-based campaigns. This work conceptualizes and tests some of these uses-cases and is also helping to direct development efforts on this front.”

Gil-Bardají added, “At Vortex, we see our partnership with NRG as a first step towards a hybrid model of measurements and modeled data that we expect will become a future industry standard. Such an approach, if clearly documented, will complement the strengths of both models and measurements. The former never have gaps, the latter is the reality. The ultimate benefit of the collaboration between NRG and Vortex will be a 100% availability of data packages by NRG, mixing their measurements with our synthetic data. It has been very useful for us to develop wind energy tools in collaboration with NRG, the company leader of the sector.”

NRG plans to conduct further proof-of-concept tests for various use cases in which the Vortex LES product, Lidar observations, and GapFill can be combined for deeper project insights, increased confidence in observational data, and Lidar system deployment strategy decision-support. Our goal is to develop strategies for handling and processing Lidar data ahead of model integration as well as GapFill refinement for slight variations in optimal output for various use cases. Arntsen, said, “We are lucky to work with a group like Vortex that shares our vision for higher-value synthesized data products, and it has been extremely beneficial and enlightening to have access to their deep expertise and valuable perspective on these topics.”