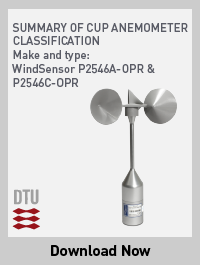 We’re excited to announce that WindSensor has released an updated classification report for the WindSensor P2546-OPR class 1 anemometer. Classification is used broadly in the wind industry to formally characterize an anemometer’s operational uncertainty. In other words, it indicates how effectively a sensor measures wind speed.

This report—which applies to both the P2546A-OPR and the P2546C-OPR—is exciting not only because of the results, but also because of the high standard that has been established to obtain them. The resulting classification indices of 1.32A and 3.71B make the P2546-OPR the highest performing cup anemometer in the wind energy industry that is backed by a fully IEC-compliant classification.

The new classification report is:

1. Aligned with the Updated Product Design
The anemometer’s classification is now up-to-date with the current sensor design.* The design changed significantly in 2011 with the shift to a one-piece rotor (OPR), which dramatically improved survivability under harsh environmental conditions.

2. Processed Independently
Many existing anemometer classifications rely on the manufacturer’s own in-house testing, modeled data, or on legacy information from the Accuwind study completed in 2006. The new WindSensor tests were run by Svend Ole Hansen ApS, and the results were processed independently by DTU Wind Energy.

3. Fully Compliant with the IEC Standard
This is the only anemometer classification whose testing and data processing strictly adhere to IEC 61400-12-1, making it possible for the first time to fully characterize uncertainty according to this important international standard. More specifically, physical measurement data were collected from the same two serialized sensors for each of the key classification criteria (calibration, tilt response, torque, and friction) according to the IEC 61400-12-1 standard.

* Note: Renewable NRG Systems completed an interim classification report in August 2013 with the intent to bring the classification indices in line with the current design. While the results of the two studies are very close, those published by WindSensor represent the manufacturer’s official results.