This Valentine's Day, wind energy seems to be "wookin pa nub in all the wong places."

While other energy sectors enjoy federal subsidies that artificially lower the costs of extraction, generation, and decommissioning – not to mention polluting – wind doesn’t have the same cozy relationship with Congress. Our cries to “level the playing field” fall on deaf ears among the energy ideologues. So we do what any bootstrapping, innovative industry does – we direct our "love" inward and become more competitive on our own.

In a second interview in this series, I sat down with NRG Systems’ Evan Osler who oversees business development for the WINDCUBE Lidar (light detection and ranging) to talk about how remote sensing is lowering the cost of wind energy. 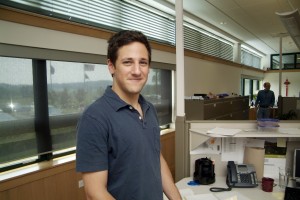 How are remote sensors being used in the industry today?

They are used throughout the development cycle. From early stage prospecting and wind resource assessment to power curve verification and performance optimization, remote sensing is helping us characterize potential and existing wind farms more accurately. As the industry has become more comfortable with the technology, we’re seeing broader applications, especially with Lidar which has been used successfully for wind forecasting and ongoing measurement of operational wind farms.

What’s changed over the past year? Have technological evolutions addressed initial objections?

Bankability of data and remote power supply were two initial concerns – along with lack of familiarity with the technology. Traditional methods of measuring wind with mechanical sensors and a met mast are simpler to understand because we can see them working. Not so with remote sensors – it took some time for the industry to understand how they work, and that process is ongoing. Independent reports have addressed accuracy and reliability concerns by validating the performance of remote sensors.

There are pros and cons of Lidar and Sodar (sonic detection and ranging.) With Lidar, a higher initial price point is the trade-off for superior measurement accuracy and data availability at higher heights, through the range of atmospheric conditions encountered in the real world. Lidar also works in constrained locations or at sites with frequent precipitation. Both of these are situations where Sodars might not measure properly, if at all.

Another objection had to do with wind speed accuracy in complex terrain. We are addressing that change with the introduction of a fifth, vertical laser beam to the WINDCUBE v2, which enables us to measure changes in wind speed at the center axis of the volume of air, not just at its perimeter. This allows wind farm developers to collect direct, accurate measurements in complex flow (without any need for post-correction.) We’ve also made progress on substantially lowering power consumption and putting Lidars atop nacelles for power performance and optimization. This next wave of technological advancement is coming on quickly.

Is the use of remote sensing now common?

A large number of North American wind developers have adopted remote sensing in the past 24 months – which mirrors what we’ve seen in Europe. It has helped some companies get wind measurement campaigns going quickly where permitting and/or installing conventional met towers can take weeks or months. It has also helped companies secure more favorable lending terms or power purchase agreements. With Lidar in particular, customers have been able to collect “bankable data” by reducing vertical and horizontal uncertainty. Because Lidars can measure at heights up to 200 meters and can be moved around a site, developers don’t have to guess what the wind resource at hub heights or exact turbine locations might be – they’ll know.

If I’m a developer looking to purchase a remote sensor for wind resource assessment, what should I know before buying?

First, they should understand the level of data accuracy required. Are they looking for qualitative data – a picture of what’s happening? Or are they looking for quantitative data they can take to the bank? Additionally they should consider whether the remote sensor will be used as a relative tool – in conjunction with a met mast – or as an absolute tool on its own. In the latter case, reliability and availability of data is really important.

Second, they should consider the complexity and remoteness of their site. In certain places, transporting and constructing a met tower simply isn’t economical. This is where flying in a remote sensor may provide the best bang for the buck. The same argument holds for very tall towers that are expensive to install. In this case a developer could locate a few 80 meter towers and move a remote sensor around the site to lower uncertainty.

It’s all about Return on Investment. Does the initial cost save a developer in the end by securing a lower cost of capital or more favorable power price? In many cases the answer is yes. Overall the industry is pushing for better characterization of sites throughout the development cycle – from WRA to operations. Use of remote sensing, in conjunction with towers, not only helps us do that, it also helps lower the cost of wind to the rate payer by delivering more power, more reliably.