Get Back To Work: A Visit from Bill McKibben 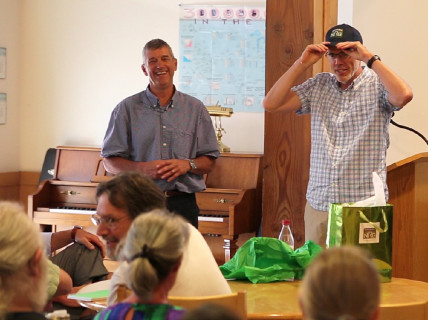 Justin, our president, presented Bill McKibben with an RNRG hat.

“The work you are doing matters. I actually don’t want to take up much of your time, because you guys need to get back at it.”

It’s not every day that one of the world’s leading climate activists stops by your office and says that your day job matters. But we were lucky to have Bill McKibben, author, environmentalist, and a founder of 350.org, visit the RNRG headquarters on July 14th. With our staff gathered in the café, he spoke about renewable energy, fossil fuel divestment, and most importantly, the people around the world who are deeply committed to the cause.

In the renewables industry, it can be easy to get lost in the day-to-day details: energy production, engineering designs, numbers, numbers, numbers. These things are, of course, critically important. But many of us are in this industry for reasons that go beyond the profit/loss model: we believe renewable energy plays a key role in counteracting, or at the very least slowing, the effects of catastrophic climate change. In short, renewables are one way to save the world. 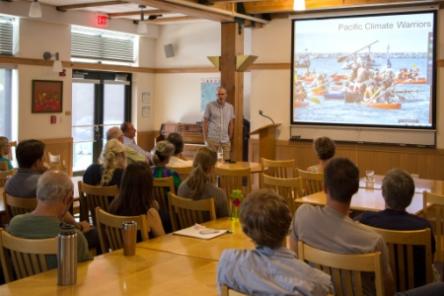 Bill shared photos of 350.org demonstrators around the world.

Bill McKibben’s talk was a great reminder that there is a global community of people working to bring about political change. When one employee asked how he can convince relatives that global warming exists, Bill didn’t mince words. “The problem,” he said, “is that we all seem so small. And the perception that we are powerless is correct, in a sense. Climate change is a structural, systemic problem.”

“But,” he continued, “the secret is that we don’t need to convince everyone.” He pointed to the recent marriage equality ruling in the U.S. “I’m sure most of you agree with marriage equality. But how many of you were politically involved with that? Still, the folks who were active were enough. In the U.S., we need no more than 2 or 3 percent of Americans to engage.”

His overarching message? We are doing vitally important work. We need to keep this industry humming along. And on the weekends, we should consider getting involved with the greater climate activist community because, well, our future depends on it.

Learn how you can help—from writing letters, to participating in marches, to even, yes, getting arrested—at 350.org.