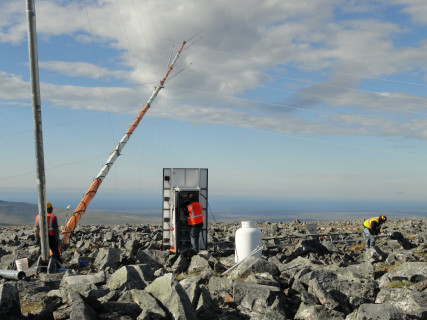 This is a guest post written by Keith Broyles, president of KB Energy.

KB Energy, owned by Keith and Lois Broyles, is a North American-based company specializing in tilt-up meteorological tower services, including installations, decommissions, refits, and repairs. In total, we have installed over 1,700 towers, including a recently completed installation in Alaska. It was the most difficult—and the most satisfying—installation that we’ve ever done. This blog details how we overcame relentless fog, a field of boulders, and arctic temperatures to install two Renewable NRG Systems met masts on terrain that is anything but hospitable.

Goal: Install two 60m XHD TallTowers™ in a place where no one has ever done so successfully
Our Answer: …Okay

Incidentally, Alaska has amazing potential for wind energy. The U.S. Department of Energy’s Wind Atlas classifies most of the Alaska Peninsula as either outstanding or superb for wind power, and almost all of coastal Alaska and its interior mountain ridge lines have great potential. The 11 Fire Island turbines that CIRI brought online in September 2012 and Kodiak Electric’s Pillar Mountain Wind Project are just the beginning of a new era of clean energy for the state.

The towers for our Alaskan installation arrived in early August and the crew a couple of weeks later. We were anxious to get going, and we completed the anchoring and layout of the first tower site in good time. However, the weather had other plans for us. For seven straight days, we were forced to stay on the ground and could not fly to our tower location due to limited visibility. Needless to say, our best laid plans started to unravel, and we found ourselves faced with the only option to punt and try again later.

We organized a second attempt for the first week of October, after the heavy fog cleared and more helicopters were available to assist us. However, the weather had turned unseasonably cold, and it was 0° F when we arrived. In addition, a quick trip to the mountain to retrieve cold weather gear showed that equipment may have been tampered with in our absence. Once again, we decided to postpone, with the intention to aggressively install both met towers by the end of July 2013. 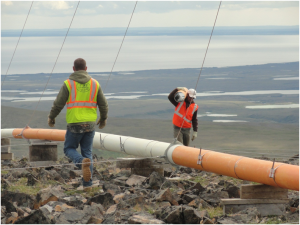 In July 2013, we had a completely different outlook upon reaching our project site. The weather was good, our people capable, and our spirits high. On the first day, all paperwork was completed and our old tools were checked and inventoried; on the second day, we prepared the remote power supply and the first loads to sling to site.

Then the ugly fog monster reared its head. For three and a half days, we sat and tried to maintain our good attitudes, desperately trying not to get upset about our string of bad luck. Even the local office staff jokingly said we brought bad weather with us.

But on Day 5, the clouds lifted and we had our window of opportunity. A team led by me and Nathan Lehman made our way to the top of the mountain.

Towers
KB chose to use NRG 60m XHD TallTowers for this project. This region of Alaska gets a lot of humidity and subsequent ice buildup, coupled with wind throughout the winter. Hence, it was necessary to take some extreme precautions. First, we coated the towers in ice-phobic paint, in alternating bands of orange and white to match FAA regulations. The guy wires also were coated with ice-phobic paint to shed the unwanted tonnage caused by ice buildup. 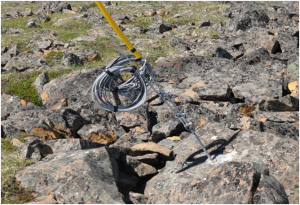 We also designed ice collars for the 10” lower tube sections of the tower. These collars are designed to support the weight of the tower and keep the sections from telescoping into each other if there is any ice buildup. They are intended to perform a similar function to the bolted joints that Renewable NRG Systems now offers in their Super 60m XHD and 80m XHD TallTowers.

Data Loggers
We selected the SymphoniePLUS®3 data loggers made by Renewable NRG Systems. They provide IEC-compliant one-second sampling and 10-minute averages that are stamped to an SD card on an hourly basis. Data are transmitted via Symphonie iPackGPS units equipped with Iridium satellite modems to the KB Energy server daily. Reporting on the data is being completed by KB’s meteorologist.

Remote Power Supply
Our remote power supply is unlike any other used in the wind industry. We integrated wind power, solar power, and an advanced AMI Roamio fuel cell, along with a backup liquid-fed, propane-powered generator.

Together, these power sources keep our satellite communications, FAA lights, and heated sensors running throughout the harsh Alaskan winters. 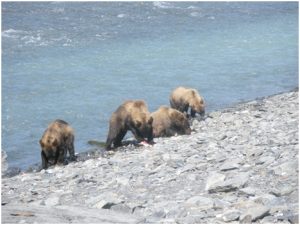 Anchors
We were given several restrictions on our anchoring techniques for this project. First, we could not leave any concrete onsite after the study was complete. Second, we needed to avoid disturbing the soil as much as possible. Third, we could not utilize deadman anchors due to helicopter weight restrictions. That left us with only one legitimate option: rocks.

With anchors drilled into the extremely dense basalt (~6000 lbs./cu.yd.), we were able to utilize the rocks onsite. This saved a tremendous amount of money. However, the rocks also proved to be treacherous footing for installing a tower. Much care had to be taken to ensure nobody twisted or broke an ankle while working in the boulder field.

As crew leader Craig Bridge said, “I would equate this to working on the surface of a meteor.” 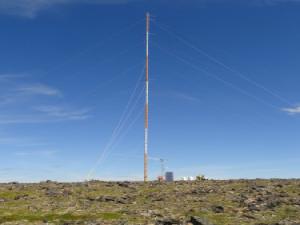 How do you access met tower locations that are 20 miles from the nearest road? Easy: helicopters, lots of helicopters. We used Eurocopters, 500’s, and A-stars—just to name a few—to sling in our loads and get rides to the sites. Wildlife was very common; moose, caribou, grizzly bears, black bears, and wolverines were seen daily from the cockpit.

Each tower location required at least 10 helicopter slung loads. Air compressors, towers, RPS, tools, electronics, wire, and propane tanks all had to be weighed individually and calculated to determine which helicopter could handle the load.

We expect this project will give us some seriously strong winds and high capacity factors.