I love the holiday season.  Where I grew up, Christmas was the major family holiday with a concentration of visits to the pub followed by overeating and naps. The holiday itself was centered on gift giving surprises, food preparation, more imbibing, and attempts to find batteries which were not included with the gifts.

This year for many people the holiday will be hard. The news about unemployment and those who are no longer registering for unemployment makes the headlines every week, and uncertainty about the future means that those still employed are cautious about how they spend their money.

Given this, I do not understand why the U.S. government is being so generous to foreign countries. What do I mean? Well, by vacillating on the Production Tax Credit, which requires no upfront government spending (see my last blog), Congress is forcing US and foreign firms who want to invest in the U.S. wind industry to look for opportunities overseas. Not only this, Congress is creating a situation where those firms may close their U.S. manufacturing plants in the absence of any development opportunities beyond 2012. 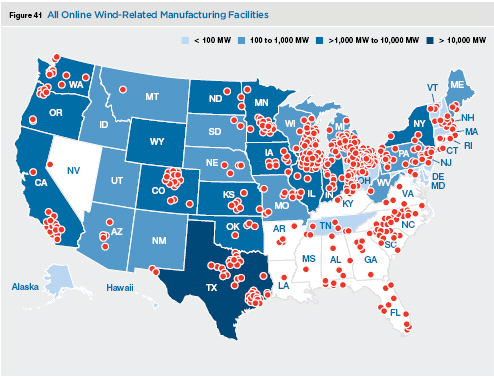 According to the American Wind Energy Association, the wind industry has grown by 26% a year for more than 25 years and during that time has reduced the cost of wind power by 90%. During that time over 400 new manufacturing facilities were sited in 43 states, creating over 75,000 jobs. This has been achieved despite the cyclical boom/bust created by unpredictable federal policies.

Imagine if we hadn’t lived through those boom and busts – if stable, certain policy support had been in place? We would be well on our way to meeting the Department of Energy’s 20% wind power by 2030 scenario and creating the 500,000 jobs to support our industry.

That would have made a pretty nice dent in the present unemployment numbers.

Now, we should be fair here. As with gift giving to family members, it’s important to give everyone something of equal value and not to show favoritism. So too should the government deal fairly with its energy producing family members.

The oil, gas and coal companies will receive $40 billion (add 9 zeros) over the next ten years in direct subsidies. These are long-established permanent subsidies imbedded in the US Tax Code. In addition, they are not required to pay for the “externalities” caused by their extraction and manufacturing processes.

Goodness knows the true cost to the environment and human health caused by oil spills, groundwater poisoning, mountaintop removal, dirty air and radiation! In this respect, renewing the PTC would not even come close to being fair. But, alas the actions of Congress are all too real and Santa Claus is not.

If only Congress could renew the PTC for an extended period of time and give the wind industry a chance to plan properly… I think Uncle Sam would be happy with the result.