China and the US: Competition or Cooperation on Clean Energy?

Competition or cooperation with China will seem like an odd question to many in the U.S. wind industry. Since my last blog post on China, you may have noted the Global Wind Energy Council announcement that China passed the USA for installed wind capacity:

China now has 42.3 GW of wind power, and has surpassed the US in terms of total installed capacity,” said Li Junfeng, Secretary General of the Chinese Renewable Energy Industry Association (CREIA). “This puts China firmly on a path to reach 200 GW of installed wind power by 2020. At the same time, China has become the world’s largest producer of wind energy equipment.

Add to that announcement the stories of trade competition and national one-upmanship surrounding the recent U.S. visit of Chinese president Hu Jintao, and my question seems even more out of place. 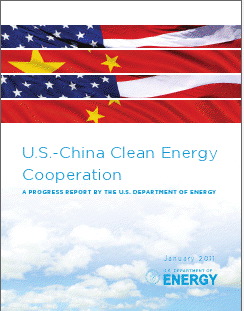 But I recently received an interesting report from my friend, David Sandalow, Assistant Secretary for Policy & International Affairs at the U.S. Department of Energy. Even a quick reading of U.S. - China Clean Energy Cooperation: A Progress Report by the U.S. Department of Energy showed me there was much I was unaware of, and much of it is positive.

For those of us in renewable energy industries, China's 100-year planning horizon is something to marvel at when it seems as if the U.S. cannot think beyond the next election cycle on energy issues. Here is clear evidence of longer-term thinking by U.S. government leaders. The Progress Report includes details and an update on the seven U.S.-China clean energy initiatives first announced by President Barack Obama and President Hu Jintao in November 2009:

While it's impossible for me to be enthusiastic about nuclear as "clean energy," or the coal and shale gas initiatives, five out of seven of these cooperative efforts are exactly the type of long-term policy focus I, and others, have called for in the past. Research on clean energy can help to drive down the cost of production. The Renewable Energy Partnership is already producing positive developments. Cross-country workshops between DOE's National Renewable Energy Research Laboratory (NREL) and China's Electric Power Research Institute have led to a "multi-agency team developing analysis to support national planning for wind and solar electric generation and transmission." The wind industry has long identified the lack of such planning as a major obstacle to the growth of wind energy. One statement in the Progress Report on the Renewable Energy Partnership is likely to be even more warmly received:

The two countries are also developing a public-private partnership to promote joint commercial ventures, holding a workshop in December 2010 to assist Chinese investors in making investments in the U.S. wind industry that will create jobs in the United States.

Cynics will, of course, point out that words are cheap for competitors and government officials. But past attitudes and behaviors have brought the world — and China and the U.S., the world's two largest producers and consumers of energy in general, and coal in particular — to our current unsustainable economic and environmental energy situation. Wasn't it Einstein who defined insanity as doing the same thing over and over again and expecting different results? I'd rather swap U.S.-China competition for cooperation, believing as the Progress Report concludes, that "Working together, we can accomplish more than acting alone."

World Bank blogs: Will China and the US be partners or rivals in the new energy economy?