Behind the Scenes: Evaluating NRG 200M's Offshore and Coastal Performance

NRG sensors endure a battery of intense tests before they are released to our customers. The NRG 200M Wind Direction Vane was no different. This sensor joined our product portfolio in January 2018, after yielding successful results across a variety of electrical, mechanical, and environmental verification tests, in addition to a year-long field test where it faced real-world conditions.

One of the improvements in the 200M that we were most eager to see the impact of was the introduction of sealed bearing and electronics capsules, which protect the vane’s internal components from water and dust ingress. The 200M’s magnetic encoder-based signal generator is fully enclosed in a manner that is impossible to achieve in the 200P, our first generation wind direction vane, as well as other potentiometer-based wind vanes. It is our expectation that the 200M’s design will extend useable life in wet, corrosive, and dusty environments.

To verify the dust ingress protection of the 200M sensor, NRG performed the standard test to prove IP6x performance, utilizing our in-house dust chamber. An exposed 200M electronics module, which is housed in the lower section of the sensor assembly, was mounted in the chamber and powered for the eight-hour test duration. 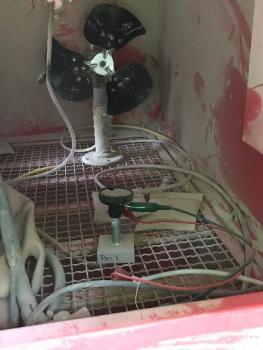 The supply voltage and current remained constant throughout the test, and an inspection of the 200M after test completion showed that the sealed electronics module passes the IP6x requirements, with no dust ingress present inside the electronics module. 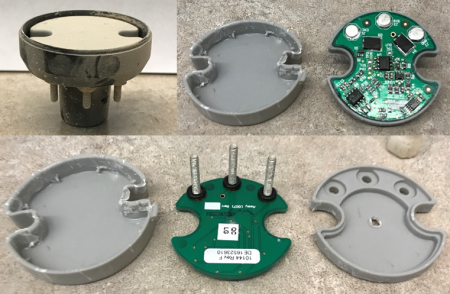 To verify the water ingress protection of the 200M sensor, NRG performed the standard test to prove IPx5 performance. To execute the test, water indicating dots were placed at multiple locations throughout the sensor housing and circuit board enclosure, the sensor was installed on a boom mounted to a rotating table within a custom spray station, and water was sprayed on the sensor at three different angles for a prolonged period. 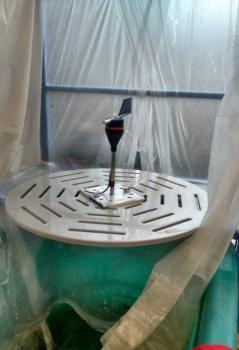 The sensor passed the test procedure, with unchanged sensor current draw and output voltages, no issues with mechanical rotation of the sensor, and no evidence of water observed inside the sealed printed circuit board (PCB) capsules. 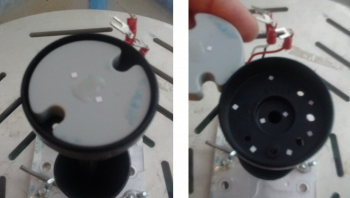 To further verify the sensor’s performance in corrosive conditions, NRG subjected a 200M test unit to a 28-day salt fog test in accordance with an internationally recognized salt spray test standard. The test is designed to simulate, on an accelerated timeline, the level of salt water exposure that a sensor would encounter during a long-term measurement campaign at a coastal or offshore site. A complete 200M Wind Direction Vane was included in the test, seen in the upper right section of the picture below, which shows the overall test apparatus, including a variety of other NRG products and prototypes. 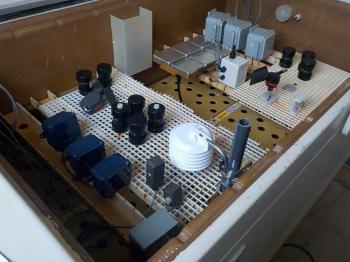 The 200M Wind Direction Vane passed the salt fog corrosion test, with the vane continuing to rotate freely, no compromise of the electrical output, and no signs of excessive corrosion on the bearing capsule components. Salt did build up on exposed surfaces during the test, but it did not affect the sensor’s mechanical or electrical operations. An inspection of the shaft and bearings found no corrosion present, and there was no sign of salt accumulation or corrosion inside the bearing capsule. 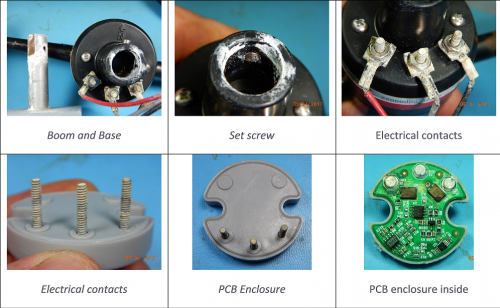 Eight 200M sensors were deployed to a test site on the coast of Newfoundland for a duration of 12 months to further test the sensors’ robustness in a real-world corrosive environment. Six 200P sensors were also included in the test to serve as a reference. Each sensor was mounted roughly 10 feet in elevation, and were connected to a SymphoniePRO data logger to enable continuous monitoring of their output. The site is subjected to nearly constant salt spray due to its location on the coast of the North Atlantic Ocean.

After nine and twelve months of test exposure, one 200M Wind Vane and one 200P Wind Vane were retrieved by NRG and examined. For each pair of sensors, the 200M was found to be in superior condition relative to the 200P that underwent the same test duration. The 200M vanes showed no signs of water ingress or salt accumulation in their sealed bearing and signal generator capsules. All sensor electronics were found to be free of contaminants and operated as expected, both while in the field prior to removal and during bench tests conducted upon the sensor’s return to NRG. 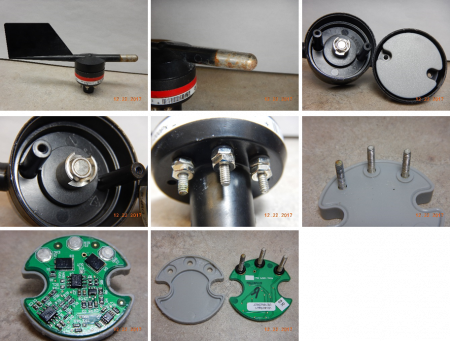 Focusing on the sensor that experienced 12 months of exposure in particular, upon disassembly the sensor showed no signs of water ingress or salt accumulation in the bearing areas or sensor body. Some dust did accumulate in the labyrinth area, as expected, but dust did not reach the bearing race, indicating that the labyrinth successfully prevents airborne particles from reaching the bearings.

Electrically, the sensor operated within specifications over a complete 360-degree rotation, showing no signs of degradation. The circuit board was free of contaminants and there was no indication of water ingress to the PCB module, confirming that neither water droplets nor water vapor were able to penetrate the sealed module over the full twelve months the sensor was deployed at the coastal test site. 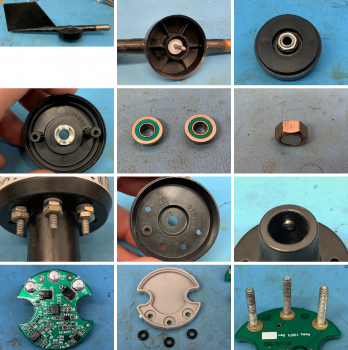 Based on the results of all tests and the performance of the many 200Ms deployed in the field at both NRG and customer-owned sites, we are confident that the 200M Wind Direction Vane is well-suited for long term measurement campaigns offshore and at coastal sites with intense sea spray conditions.

Interested in learning more about what sets the 200M apart from other wind direction vanes? Please visit the product page or contact our sales team for more information.