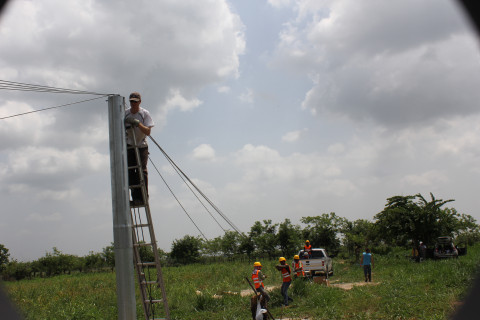 Drew threads guy wires into pulleys at the Barranquilla site.

My colleague, Emeric, and I recently traveled to Colombia, South America, to install an 80m XHD TallTower™. This met tower will be used to collect wind data on a site to determine whether it is viable for a small wind farm in the future. Visiting Colombia for the first time and only speaking a tiny bit of Spanish, I was both excited and wary. But most of the anxiety left once we arrived in Cartagena and were greeted by friendly people and a bustling airport. Taking in the sights during the two hour drive from Cartagena to Barranquilla, I noticed the stark contrast between the modest to luxury homes along the coast and the crowded villages focused on local farming.

Driving throughout Colombia was by far the most entertaining and scary event each and every day. “Dodge everything” was the rule to follow. On the road, you could encounter people walking; riding donkeys; pulling carts; riding bicycles, mopeds, motorcycles; buses packed with people; hundreds of mini taxis; large trucks; even cows in the road!

Working with installers from Costa Rica—the Renewable NRG Systems dealer Nordteco—and hired local help, we erected the tower in the summer heat of July (95-112 degrees F). The site for the tower was approximately 20 miles south of Barranquilla, Colombia’s northern port city. The meadow belonged to a farmer who raises cattle, chickens, and goats. Having experienced wind farms in the Midwest United States, it was exciting to see that a small town in Colombia could also be powered by wind energy and that a local farmer could benefit from an annual salary for the use of his land.

Hydration was key in surviving the heat, plus a two hour lunch to regain energy for the afternoon work ahead. With some work completed before we arrived, the site was prepared and the tower was raised during a four day period. A few hurdles had to be navigated during the process. At the first stage of the lift, we discovered that the winch had been damaged during shipment, affecting the hydraulics. We acquired the new parts to fix it the following day and successfully raised the tower. 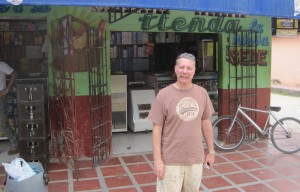 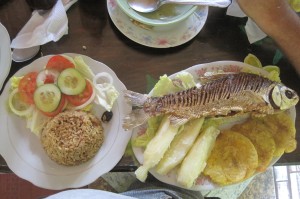 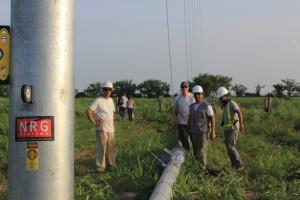 The group pauses for a photo under the finished tower.

The relationships that we built with our installer, Nordteco, while in Colombia, reiterated the value of working alongside customers in the field as well as helping them from the office. Knowledge about the complexities of the 80m XHD Tower was gained by all parties involved. These strong relationships will aid in the success of many projects into the future.