Yesterday was Sunday, a perfect late summer day in Vermont. My wife and I went kayaking on Little Hosmer Pond in Craftsbury, a two kilometer long north south impoundment built in the 19th century to supply water power to a mill. As we pushed out into the pond, we could see the Lowell Mountain ridge about 15 kilometers to the north.

Stretched out along the ridge, silhouetted in the summer sky with towering cumulus clouds and lit by the afternoon sun were seven completed turbines and another eleven under construction. They are big, no question about that, but in my view they are beautiful (and there are lots of questions about that).

Several years ago the founders of NRG Systems commissioned a print from a Vermont artist named Sabra Field. The print shows a row of turbines on a ridge in the alpenglow as the sun sets. It is beautiful and at the time was a visionary image. This wind farm in Lowell is the actualization of that vision, although a summer thunderstorm obscured the ridge before we could see the sunset. 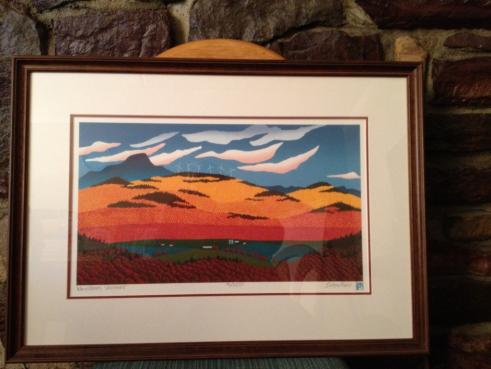 NRG Systems is not a turbine manufacturer or a wind farm developer (unlike our namesake NRG Energy). We build equipment and systems to measure the wind. Our products – towers, sensors and data loggers – were used on Lowell Mountain to evaluate and characterize the wind resource for the developer Green Mountain Power. But NRG Systems is, and I am, passionate about the potential of wind power to contribute to a long-term sustainable energy future for our home state, Vermont, for our country and for the world.

While I recognize that the installation of eighteen industrial wind turbines on Lowell Mountain in the middle of a relatively pristine (relatively because it was aggressively logged over the years to provide timber for that mill on Little Hosmer Pond and others) will change the ridge’s character, I see those shining white turbines on the high horizon as an uplifting and tremendously encouraging symbol of a better future. I hope and expect that they will stand as an emblem of Vermont’s commitment to a sustainable future.