I recently had the opportunity to participate in two protests in Washington, DC to raise awareness about the Keystone XL pipeline and the dangers this project presents to the environment and climate change.  The protests were organized by 350.org, whose mission is to build a global grassroots movement to solve the climate crisis. 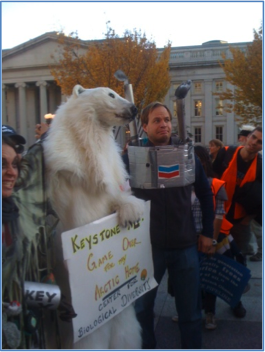 My path to protest

My interest in these protests began after hearing a talk by 350’s founder and spokesperson, Bill McKibben.  He said that politicians were not listening to the people and chose to ignore the scientific facts, and in light of this, 350.org had to change their approach.  He felt it was time to include civil disobedience and protest in 350’s operations—a new approach that would be used in the fight against the Keystone pipeline.

Bill’s message resonated with me.  I too felt frustrated by politicians who appeared to ignore the voice of scientific evidence.  Although our elected officials have talked about changing our energy future, President Obama and the Congress were not taking action.

I made up my mind to support these protests.  In September, I took a bus to Washington and was arrested at the White House along with 1200 other protestors.  Our arrests spoke loudly to our commitment and the importance of this issue.  In November, I again traveled to Washington.  During the 12-hour bus ride, I wondered why others chose to take time away from family, traveling great distances to join this protest.  As the protesters gathered in Lafayette Park, I asked several people why they were protesting.  I discovered a diverse group of Americans with a common message.

Diverse voices, one cause

“We have to find solutions to our energy issues,” said Shimon from New York City.  “The president is listening to lobbyists and not the people.  We need to be investing in green energy with urgency not unlike the Manhattan Project.”

Roman from North Carolina told me, “I believe people need to seen—it is the only way we can be heard.  I hope President Obama will see all these people joined in solidarity protesting our failed energy policies.” 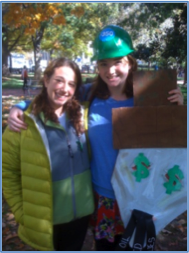 Grace, a Washington, DC native said, “I believe this is the most critical issue facing this nation.  If you listen to the climate experts, such as Jim Hansen, they will tell you that tapping the tar sands oil will be catastrophic to our world.  We will remain addicted to oil as long as those who profit from it are the only voices that are heard.  This protest is the start of a new mood of engagement and speaking truth to power.”

Zoe, a Tennessee native who attends Earlham College in Indiana, stated emphatically, “I think it is preposterous that I need to travel all the way to Washington, DC just so politicians will take notice.” 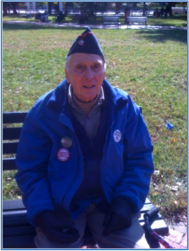 And finally I met Larry, a fellow Vermonter and WWII veteran, who came to DC to voice his concerns about our environmental policies and the dangers of climate change.

So under bright sunshine 12,000 protesters joined hand-in-hand and circled the White House.  Although we each had personal reasons to protest, we together had a common voice, purpose and message.

One week after the “Surround the White House” protest, President Obama decided the Keystone Pipeline should go back to the drawing board and the final decision will be pushed passed the 2012 election.  This delay does not mean our country’s energy policies will or will not change.  Nor does it assure a safer climate future.  What it does demonstrate is that peaceful protest can magnify our voices and allow them to be heard.

As I complete this blog, the voices of powerful lobbies are drowning out the voices of the protestors.  Today the GOP has introduced a bill to force approval of the pipeline.

Phil Pouech is Director of Manufacturing at NRG Systems.