How Low Can You Go?

People lucky enough to be on the roads at 7am in Burlington, Vermont might catch sight of NRG Systems mechanical engineer Paul Smith on his way to work:

The yellow car gets so much attention that he’s taped a list of “Frequent Answers” to its side.

The inspiration came through a conversation with a fellow engineer.

“John Miller started driving a cheap Chinese scooter to work from Starksboro, right into the winter,” Paul says. “He used to get 100 miles per gallon (or more!).  He wanted a more protected version to handle rain (and even snow) and we got talking. I’ve always thought we should be driving smaller, lighter cars with minimal impact and I decided to buy a scooter and use it as the basis of a completely enclosed car.  To add safety and convenience, I added a third wheel. And voila!” 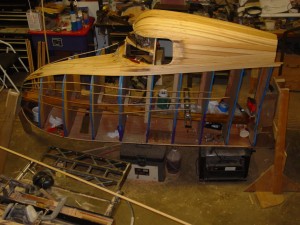 The scooter car under construction.

True to his mechanical engineering background (Paul specializes in turbine control sensors at NRG Systems), he first drew up designs to encase the three-wheeled scooter on the computer, printed them out, and used them to create forms for cedar stripped planking that he then coated in fiberglass. The final scooter has just enough room for his lanky frame and a bag of groceries.

The scooter car has been four years in the making—and is still under development. In the winter, when Vermont snow forces Paul off the roads, he brings it into his garage for upgrades. Up next? He hopes to modify the rear suspension to accept a snow tire, making it a year-round car.

And in keeping with his quest to make it even more fuel-efficient, he’s planning on switching from a very loud gasoline engine (think motorcycle and ear plugs) to one that’s completely electrical and much quieter. Better yet, this would allow him to plug in while working at NRG Systems, which is largely fueled by solar and wind power.

Sarah Woodard is a Communications Specialist at NRG Systems.