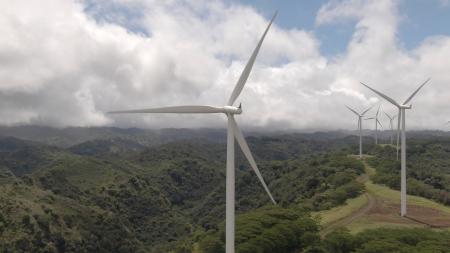 Hinesburg, VT, USA – NRG Systems, Inc. has announced the first commercial sale of its Bat Deterrent System to Kawailoa Wind, Hawaii’s largest wind farm. Located on the island of Oahu, Kawailoa Wind will outfit each of its 30 turbines with a Bat Deterrent System. The adoption of NRG’s pioneering technology is part of Kawailoa Wind’s ongoing efforts to help conserve the Hawaiian hoary bat, which has been on the United States’ list of endangered species since 1970.

Bryan Martin, Chief Executive Officer of D. E. Shaw Renewable Investments (DESRI), which owns and operates Kawailoa Wind, remarked, “DESRI has a history of adopting innovative technologies and ideas to mitigate the impacts of renewable energy development. We are excited to partner with NRG Systems at Kawailoa Wind as part of those efforts.”

Bat fatalities have been documented in association with wind farm operations in Hawaii – an occurrence that has been seen at wind farms across the globe. Because of this, conservation of these animals has become one of the most pressing issues facing the renewable energy industry today. Brita Woeck, Environmental Compliance Officer for Kawailoa Wind, said, “Wind energy is crucial to providing renewable energy in Hawaii. Kawailoa Wind is invested in finding solutions so that clean energy generation and bat conservation can co-exist here in Hawaii and beyond.”

Kawailoa Wind is currently curtailing, or turning off turbines in low wind speeds at night, when bats are most active, to minimize Hawaiian hoary bat fatalities. NRG’s Bat Deterrent Systems are expected to be used in addition to curtailment in an effort to achieve even greater reductions in fatalities. Brogan Morton, Senior Product Manager at NRG Systems, said, “We have held several trials of our Bat Deterrent System, including tests in Texas and Illinois, and have seen very favorable results among hoary bats. In Texas we saw a 78% reduction in take among this species, and in Illinois we achieved a 71% reduction. Based on this performance, we are confident that our technology will play a key role in helping the Kawailoa Wind team and assist Hawaii in reaching its clean energy goals.”

Hawaii is working toward operating on 100% of clean energy by 2045. Historically, power plants running off of imported petroleum have provided the majority of Hawaii’s electricity.

About NRG Systems, Inc.
NRG Systems, Inc., a subsidiary of ESCO Technologies Inc. (NYSE: ESE), revolutionized the way wind resource assessment was done more than 36 years ago. Today, this heritage of innovation drives everything they do. The company is dedicated to designing and manufacturing smart technologies for a more sustainable planet – that means more renewable energy, cleaner air, and a safer environment for all. Their measurement systems, turbine control sensors, and Lidar remote sensors can be found in more than 170 countries. For more information, visit nrgsystems.com.