How a “Bat Barge” Protected a Colony of Bats in Georgia

For nearly two years, NRG Systems has worked with Eco-Tech Consultants to offer bat exclusion services on bridges managed by state department of transportation agencies. But a recent project in Bibb County, Georgia, was the first endeavor that called for the creation of a floating “bat barge” to keep a colony of nearly 350 bats out of harm’s way.

Earlier this year, Eco-Tech was enlisted to conduct an inspection with follow-up acoustic bat deterrence at a bridge over Tobesofkee Creek. The bridge was set to be demolished in July 2020 as part of the Georgia Department of Transportation’s bridge replacement project. The Eco-Tech team was tasked with ensuring that no bats occupied the structure during the demolition process. 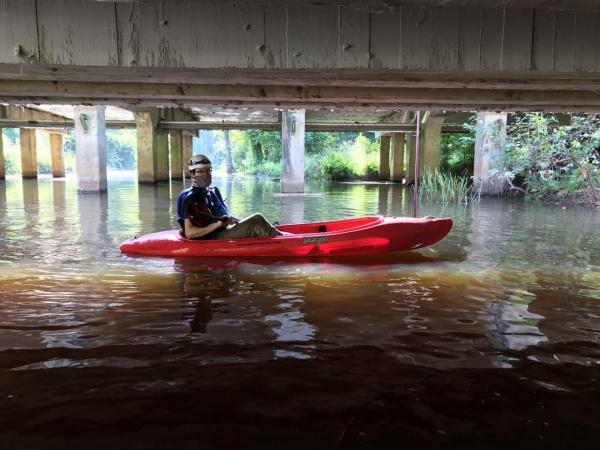 Preliminary inspections to determine the number and species of bats present at the bridge took place from May to June 2020 and involved a two-person kayak, high-power spotlight, and a digital camera. Outfitted in proper PPE and personal flotation devices, one ecologist maneuvered and steadied the kayak into position, while a second ecologist inspected all areas deemed suitable for roosting bats, both above and below the bridge. While examining the bridge’s cracks and crevices, expansion joints, girders, and abutments, a maternity colony of southeastern bats (Myotis austroriparius) was observed using the bridge as a roost. 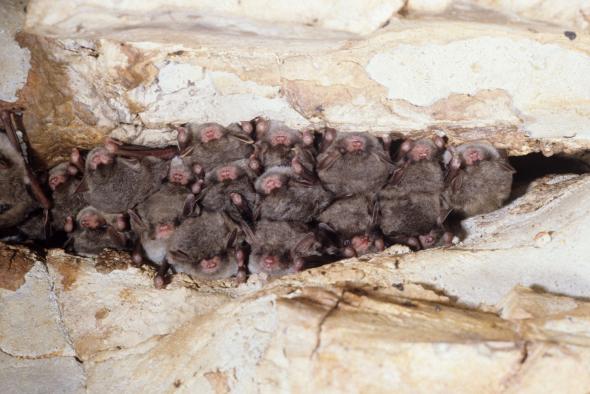 The deterrence phase of the project took place from July 12 through July 20, 2020, and involved the use of NRG’s ultrasonic acoustic Bat Deterrent Systems. On July 12, a total of eight bat deterrent units (BDUs), with four mounted to tripods on the bank of the creek and another four BDUs mounted to a customized, ten-foot pontoon barge, were deployed. The following day the bat colony population was reduced enough to only require the deployment of the four BDUs mounted to the barge to keep the bats from returning to the bridge. The barge was positioned to allow the BDUs to broadcast towards both bridge abutments, allowing for assistance from reverberation to achieve full acoustic coverage throughout the bridge’s underdeck. While high bat activity was observed in the surrounding habitat, none was observed in the direct vicinity of the bridge due to the acoustic broadcast.

According to Drew Powell, Project Ecologist at Eco-Tech, “The bridge demolition project in Bibb County, Georgia, presented a unique situation that required innovative thinking in order to protect the wildlife inhabiting the bridge. With the colony of southeastern bats roosting in an open expanded box beam directly over Tobesofkee Creek, obtaining full ultrasonic acoustic broadcast from the banks seemed implausible. With expertise contributed from multiple staff scientists, the Eco-Tech team was able to fabricate a floating bat deterrent vessel that housed all necessary equipment for successful deterrence.” 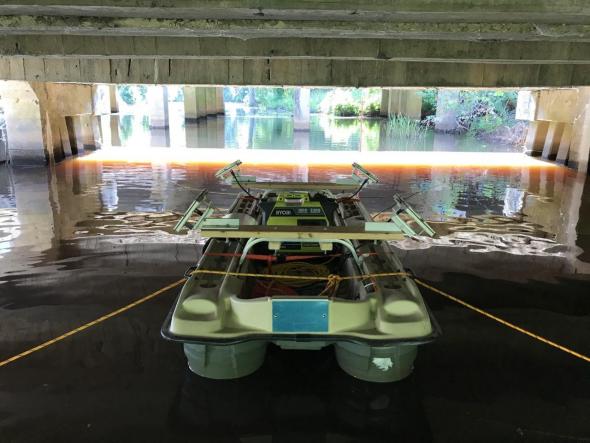 For the rest of the deterrence period, methods varied between full acoustic broadcasting and behavioral observations with no active acoustic broadcasting. Observations revealed very few bats returning to the bridge for night roosting and no bats were found occupying the structure in the mornings. This allowed demolition activities to commence while keeping members of the bat roost safe.

Powell said, “With the help of NRG and their advanced ultrasonic acoustic bat deterrent system we were able to protect a large colony of bats along with obtaining some interesting behavioral data. Additionally, the nightly deployment of the 'bat barge' allowed the contractors to continue with their demolition activities as scheduled, a win-win situation.”

John Ugland, NRG’s Product Manager for Bat Deterrent Systems, added, “While NRG developed its Bat Deterrent System to keep bats safe at wind turbines, it has been fascinating to see the myriad situations and locations where this technology can be applied. At the end of the day, we want to protect as many vital bat populations as possible, and we are excited that our systems have proven effective both on and off wind farms.”

Visit our Bat Deterrent System product page to learn more about this technology and sign up for updates.