Grandfather! On April 20th one of my daughters gave birth to my first grandchild, a boy whose name is Rainier. To me he is not only the culmination of two family histories, but also a 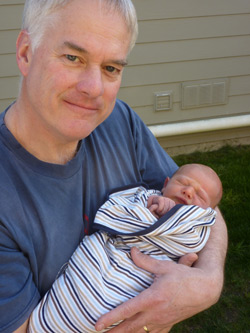 representation of hope and new beginnings, a clean slate. Looking at his innocent face calms me, but I become unsettled when I think of what the future world picture might look like for the growing child. Especially when I consider energy consequences and the constantly unfolding situations in the Middle East and Japan, and particularly since effects of the latter have recently showed up where my daughter lives in Washington state.

But I am an optimist by nature and I have high hopes for my grandson’s future. Let me share a recent experience as an example... I was returning from a trip to Brussels and sitting in one of the aisle seats in a middle group of three. A young man in his mid twenties was sitting in the other aisle seat with his daughter of about five months. He was feeding her that puréed stuff in jars that looks pretty good until you taste it yourself, while a woman in her late twenties, and unrelated to either of us, sat in the middle seat.

After finishing the jar of food, his daughter looked ready for a nap, but was much too unsettled to relax. Everyone within earshot was curious as to how this relatively new dad was going to cope with his rapidly deteriorating situation. He needed help and everyone wanted to pitch in. He tried to calm her, we tried distracting her with toys, and others behind us tried the peek-a-boo thing over the seat back. Finally I said, "I have three girls of my own and I was good at getting them to quiet down when they were fussy. I would be happy to try if that is alright with you?" To my surprise he agreed.

When I took took her up in my arms she looked at me and broke into a smile. Off we went down the aisles and around the plane a few times. I was happy because everyone was smiling — all the passengers we went by, the stewardesses, the young dad, but most of all, the baby. I still had the touch. I knew right then I was going to make it as a grandfather.


More than a Name

It seems that pending “grandfatherdom” also carried the responsibility of knowing the answers to a lot of questions people ask.  The toughest was what do you want to be called? I have no idea, but I am thinking hard about it. Maybe "Big Daddy", that is sort of like grandfather.

When I think about what I want to be called by my new grandson, what really comes to mind is how I want to be known by him. For me, grandfather can mean loyal friend, wise teacher, good influence, safe haven — I want to be all of those things. I want to be someone he can trust and provide an insight into his family history, one rich with values and strong family bonds of enduring love.

Grandfather, Grandaddy, Poppy... I suppose it doesn't really matter to me what I am called. It will be perfect because when I hear it from my grandson, I will feel inside the way I do now... young not old.


Which Future Lies Ahead?

But what about the future? What type of environment and world will the young child grow up in? Will it be one where we try to live in harmony by respecting and helping each other similar to my experience returning home from Brussels? Or will it be like the Middle East and Japan; fraught with struggles over oil and the consequences of poor choices of energy sources where both humankind and the planet continue to suffer?

So while I am thinking happy thoughts today and gladly accept the weighty responsibilities that come with being a grandfather, I have a new sense of urgency to increase my efforts to do what I can to provide a safer energy environment for my grandson's future. What will you do for yours?