Seat 75E is not the seat you want on a flight from Cape Town to London.  Middle seat, last row, strangers on both sides, for nearly 12 hours.  To keep my mind off my less than comfortable situation, I read a book while flying over the African continent.

The Boy Who Harnessed the Wind is about a Malawian teenager, William Kamkwamba, who constructed a small wind turbine for his family out of an old bicycle and other used parts.  His life is so dramatically different than our lives in the western world with the things we take for granted.  In 2001 his family went through hunger and then famine, as did nearly the entire country after the corn crop failed.  The corrupt dictator publicly denied that there was hunger to cover up the fact that he earlier profited from selling the country’s food stocks. 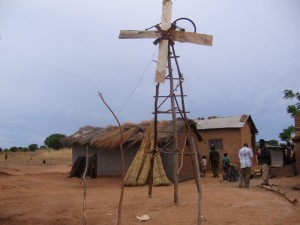 The power of wind

The idea for William’s machine, which translates as “electric wind,” came from a book he checked out from the village library.  He was in the library trying desperately to keep up with what his former classmates where learning in school.  William’s subsistence-farming father can’t afford to pay his son’s secondary school tuition ($80), forcing him to drop out.  His father struggles each year to have enough left over to buy seeds and fertilizer.  The boy salvages old parts from around his village and scrap yard –  even banging on a crankshaft for most of a day to free a single vital ball bearing.

Africa has been known as “the dark continent.”  A night satellite photo reveals that most of the continent is indeed dark at night.  The book points out that most of Africa’s 1 billion people go to bed when it gets dark or make do with fuel based lighting, fires or moonlight. Can you imagine our modern day ending when it gets dark?

For William, the wind turbine would deliver far more than just electric power.  It meant reading books at night, pumping water to extend the harvest, saving his family from backbreaking work, and providing his household with a year-round garden. As William says, “We’d finally release ourselves from the troubles of darkness and hunger.”

In the end the wind turbine did not solve his, nor his family’s problems completely.   However, it did allow him to get back into schooling and on a path that led him to higher education in Johannesburg, a trip to New York to meet other special inventors, and a future with far brighter prospects. (A video update on William Kamkwamba's story can be viewed on Ted.)


Can wind light the way?

White people (Europeans) like me have been coming to Africa for hundreds of years.  They brought foreign ideas and tried to plant them in Africa: first religion, then colonialism, then capitalism.  Many came with the best of intentions.  Some came with more sinister intentions: enslavement, exploitation, profit.

As a salesman, I can’t deny a profit motive, but I am optimistic that with Europeans bringing renewable energy knowledge and machines to Africa, this time the exploitation will be of harmless, non-polluting resources like wind and sunshine.  I hope it will provide positive and lasting energy for people who need it.  Especially the young people in disconnected villages who just need a single light to read, while high above, jets cross the dark sky like blinking stars heading to another world.

Patrick Strom is the sales account manager for emerging markets at NRG Systems. He has a passion for travel, especially to far-flung places or to the birthplace of wind power, Denmark.