Wind in the Kingdom

In Vermont, there’s an old expression. “Welcome to Vermont, now please go away.” I think it was taught to me by my grandfather, a gruff longtime resident of Jericho. He espoused the same attitude about visitors to his property, even towards his young “uncivilized” (his words) grandsons.

Tourism is a huge part of the Vermont economy, but most tourists seldom visit the rugged and unspoiled Northeast Kingdom, the three counties in the northeast corner. Having no connection to royalty, the Northeast Kingdom was given its name by Senator George D. Aiken in a 1949 speech extolling the pristine beauty of the area. The name stuck.

This part of Vermont feels different than the rest of the state. The landscape is more shaped by forestry than dairy farming – the climate colder, the towns smaller, the moose more plentiful, and the distances between neighbors greater. If Burlington is Seattle, the Kingdom is Alaska. There is a healthy respect for traditions, the landscape, the way things used to be. Technology and progress, especially the latest and greatest things, are viewed with skepticism. Needless to say, Starbucks shops are not found in the Kingdom. 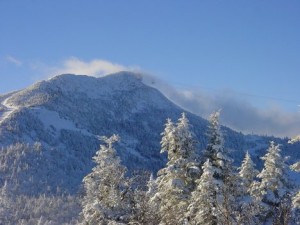 So there was bound to be some controversy and strong feelings expressed when utility-scale wind power came to the Kingdom. Despite having a strong property rights ethic, Kingdom residents think of the ridgelines and views as public assets. Wind developers “from away” were bound to be distrusted before they ever spoke a word.

After years of patient work and compromises, the Sheffield wind farm was completed in October. I saw it for the first time a couple weeks ago while passing through the Kingdom. I was driving up a steep dirt road at sunset, when I spotted a slender white tower through the thick forest to my left. The road leveled off, the trees thinned out, and a full view of the sunset and wind farm appeared. I eased to a stop, turned off the car, and rolled down the window, the same things I would have done had I seen a moose.

The pristine beauty celebrated by Senator Aiken was in full splendor. I listened to the silence. A cluster of white sentinels turned in the distance, watching over the Kingdom.