What’s in a Windcube Lidar Validation? 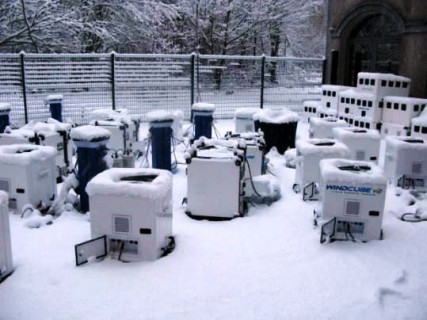 The topic of remote sensor device validation and verification has never been more prescient given the widespread adoption of Lidars and Sodars in wind resource assessment as well as the recent release of the final, adopted version of IEC 61400-12-1:2017 – the international standard for wind turbine power performance testing (PPT). This revision introduces the concept of using rotor equivalent wind speed as an alternative to hub height wind speed input to calculate the power curve in simple terrain. It also codifies the use of remote sensing devices (RSDs), in conjunction with short masts, for measurement in such tests for the first time.

While IEC -12-1:2017 Annex L provides guidelines for calibration of a remote sensor prior to its use in a contractual test, it doesn’t tell us what the best practice is for device verification in other common wind energy applications, including wind resource assessment (WRA) and non-contractual, “stand-alone” power performance testing of wind turbines. In Renewable NRG Systems’ (RNRG) experience, current industry norms differ somewhat between continents and among various consultants. For example, prior third-party, formal calibration of the RSD is common in Europe even in WRA applications, whereas on-site verification is given a premium value in North America before finance-grade data collection is performed at a specific project. Given that discrepancy, I thought it would be helpful to share with current and potential Windcube Lidar users how the performance of each unit is validated at the factory prior to shipment, and also why this method is both a reliable and economical choice for performance tracking and verification over time.

Both Leosphere and RNRG possess “golden” Windcube Lidars in our respective test centers in Orsay, France, and Vermont, USA. Unfortunately, these Lidars are not made of the precious metal, but they do serve as reference instruments against which new factory units and customer units are compared. The golden Windcubes are calibrated at the Danish Technical University’s Høvsøre test center in Denmark at least once every two years per IEC -12-1:2017 Annex L recommendations.

During the verification test, the following variables are compared between the reference Lidar and the test Lidar:

For new units, a failure of any parameter during the verification process will result in a manufacturing rework of the test Lidar until it passes. Meanwhile, stability in measurement accuracy and precision over time as the Lidar ages is very high. In March 2017, Leosphere presented a recent study of 595 Windcube validation “couplings” at the Wind Europe WRA Forum, comparing Lidar precision and accuracy from the time of manufacture to times when the Lidar was returned to Leosphere years later for maintenance. The slides from the presentation are available HERE.

RNRG has decided to take the guesswork out of Windcube verification and now offers validation testing of customer units against our reference Lidar at any time. The testing can serve as an addition or alternative to on-site validation against a mast. This can be a helpful step for Windcube users in the following situations:

1) Prior to stand-alone deployments where no mast exists nearby, and validating against an off-site mast is deemed to be impractical or impossible.

2) When the Lidar has been in long-term storage and a quick sanity check is desired prior to the commencement of an important field campaign.

4) During periodic maintenance at RNRG, for instance, during a routine hardware and software update.

Once testing is complete, RNRG will issue a validation certificate that lists the results. It is important to note that all Windcube Lidars offered by RNRG for rental or as replacement systems in continuous operations contracts will have received an internal validation within the previous two years.

RNRG’s validation service is not a substitute for a third-party calibration and therefore will not be sufficient for contractual PPT purposes. Whether it might be acceptable in lieu of an on-site validation against a met tower will depend on the end-use of the data, the site’s terrain and flow complexity, and the advice of any independent consultants who may be involved in the project. Because the Windcube’s performance is so repeatable and stable over time, we believe the Lidar-to-Lidar validation concept is both a meaningful and highly practical option for Windcube users.