In 2009, NRG Systems partnered with Energy3 to deploy a Windcube® Lidar in New Zealand. While NRG provided the Windcube, Energy3, which is based in New Zealand, was tasked with creating a custom remote power supply for the project. Following the success of this endeavor, Energy3 continued to refine their remote power supply offerings, ultimately making them more efficient and user-friendly. Once of their most recent iterations is entirely solar powered and features a cellular-based monitoring system so that data can be accessed from anywhere there is an Internet connection.

We spoke with Energy3, an authorized NRG dealer, to learn more about their remote power solutions, how their designs have evolved over time, and how these systems can enhance a Windcube Lidar deployment.

NRG: When did you start designing and deploying remote power systems for Windcubes?

Energy3: We built our first remote power supply for a Windcube in 2009, when we sold a Windcube v1 to Genesis Energy. This was based on a custom-made diesel generator system, with a sealed lead-acid battery bank. The system was fully automated and controllable via a programmable logic controller (PLC). Due to the remote location of the monitoring sites, we provided a satellite remote communications system to monitor both the Windcube and the remote power supply. This was a modular system, which could be easily transported on a custom-made trailer via quad-bike (vehicle access to the monitoring sites was not possible). Some of these monitoring sites were so remote that we even provided helicopter lifting bars specifically made to carry the power pack modules in by helicopter.

In June 2017, we constructed our own trailer-mounted power supply for a Windcube v2 we purchased for rental in Australia. We sourced the trailer in Australia, and then traveled there to fabricate and deploy the system. Due to the lower power requirements of the Windcube v2 versus the v1, this system is based solely on a solar array and sealed lead acid battery bank. This system can be monitored remotely via a cellular modem to ensure the solar system is maintaining correct function. We specified the battery bank in a conservative manner, with enough capacity to run the Windcube v2 for around 10 days without any incoming solar charge.

We added some additional monitoring capability to our trailer including a data logger and remote communications system to monitor rainfall and solar radiation. This has the benefit of collecting information that can be useful for correlating periods of low Lidar data availability with periods of heavy rainfall, and/or cloud cover. The solar radiation data can also be useful for solar prospecting, as a high-quality pyranometer was used.

We are currently constructing another trailer-mounted remote power supply for a client in Australia who has recently purchased a Windcube v2. This system will be similar to our own trailer, with several improvements based on the experience we have gained from constructing our own system. This client is also now investigating the purchase of a second v2 and trailer system. 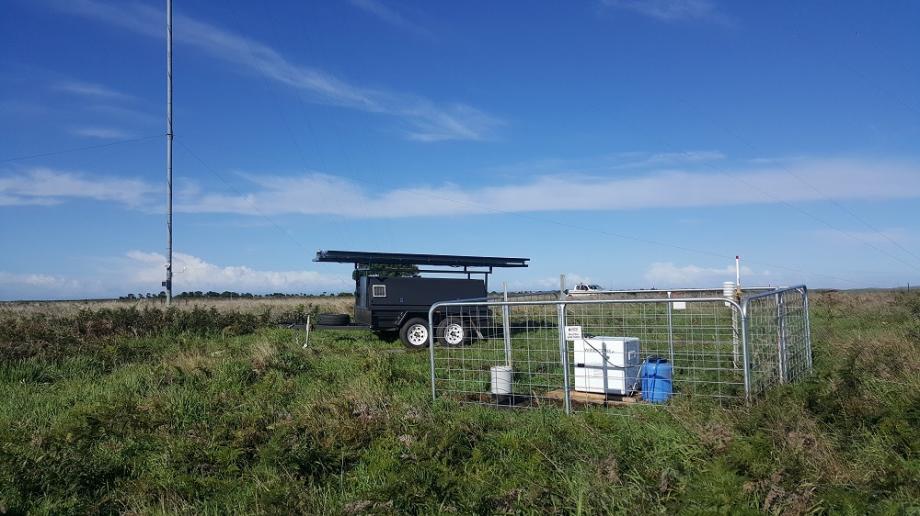 NRG: How has your design approach changed over the years?

Energy3: Our design approach has changed mostly due to the decrease in power required to run a Windcube v2 rather than a v1. The lower power consumption of the v2 means that a system solely based on solar power can be utilized, with a generator included as a backup if required. A lot of the areas of monitoring in Australia are so remote, and can have such a high fire risk, that running a generator unattended is not a good idea.

We also have based our trailer mounted power supplies on a covered tandem axle trailer to avoid having to level the trailer with an out-rigger system, and also increased carrying capacity to allow a larger capacity battery bank without exceeding weight regulations.

As cellular technology has increased over the past few years, and cellular infrastructure is also increasing, we have moved to cellular-based monitoring systems for our power supplies. This allows warning emails and text messages to be sent out in the case of abnormal system behavior. Data from our power supply systems is also hosted on our Veritas web-display server so we can examine the system performance from anywhere with an internet connection.

We are also currently investigating options for the use of Lithium Ion battery banks, due to the increase in technology around the battery management systems, and the decrease in pricing. 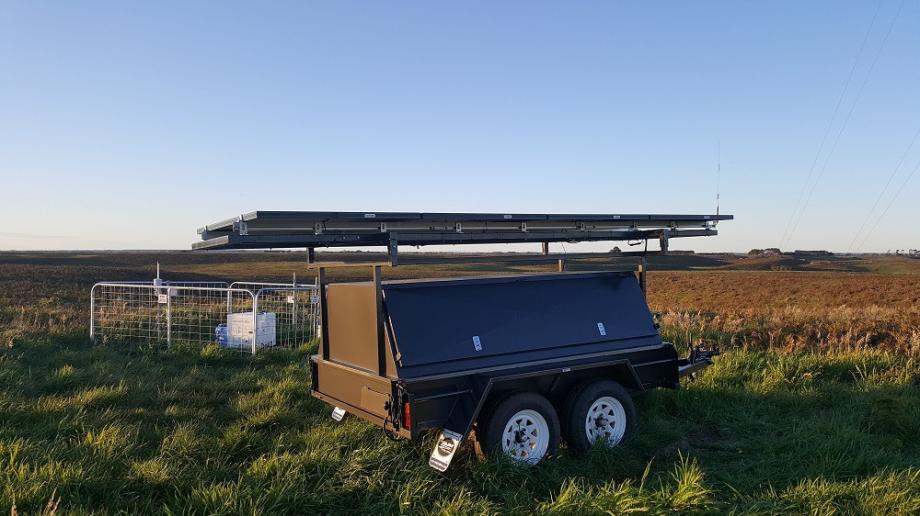 NRG: What factors do you consider when designing and deploying a remote power supply?

Energy3: We generally consider the client’s requirements first and foremost, followed by specifying the system to suit. We find a trailer-mounted system to be the most economical and it is easy to deploy. The solar panels are stored on a rack within the trailer for transportation, and a custom racking system is usually provided for transporting farm-style gates to create a secure Lidar compound.

The remoteness of the areas of Lidar deployment also play a part in the system design – easily accessible systems can be built for a lower cost than those in extremely remote areas due to the need for more redundancy and guaranteed system up-time for those in remote locations.

If cellular reception is not available at the proposed monitoring locations, a satellite-based remote communications system may be required, and this generally costs more than a cellular-based monitoring system.

The client may also specify the need for an automated backup generator if required. In our most recent system, we also included an industrial battery charger with a power socket mounted on the trailer so the client can go to the site with a standard mains generator and plug this into the battery charger in the unlikely event that the battery array goes flat due to a failure of the solar power system.

Client requirements may also include the need for warnings (alarm emails or text messages), feedback from circuit breakers, battery charging currents and voltages, etc. If this is required, the system is specified with the appropriate monitoring and alarming equipment.

NRG: How does a remote power supply enhance a Windcube deployment?

Energy3: Remote power supplies make it possible to deploy Windcube Lidar in even the most remote locations. This is particularly good for monitoring sites in New Zealand and Australia, as all the sites are very remote, with no mains power available.

Having a trailer-mounted system means the Windcube can be deployed very quickly and easily. We still transport the Windcube in the vehicle, towing the trailer to avoid any unnecessary vibration of the system during transportation. We simply just drive the trailer onto the site, erect the solar panel array, then deploy the Windcube and enclose it with stock gates. A typical deployment can be done by one to two personnel in approximately 1-2 hours on site. The trailer is also useful for storage of the Windcube transportation case, and any other required materials during the deployment. 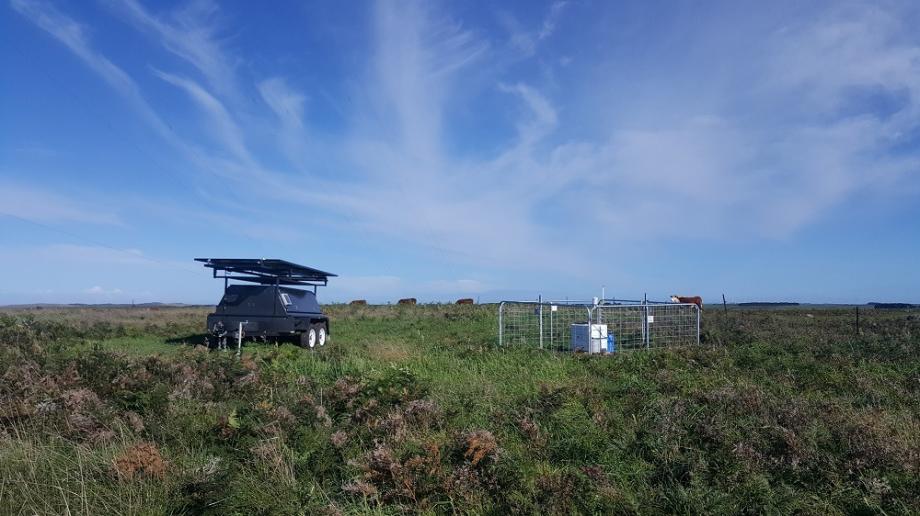 NRG: Do you think the demand for remote power supplies is growing? How can these types of deployments be scaled globally?

Energy3: Absolutely – we have had numerous inquiries for both the purchase and rental of our remote power supply systems. The number of inquiries has definitely increased in the last year or two, as we become more established in the Lidar market in both New Zealand and Australia. As I mentioned above, the client we are currently constructing a power supply for is now considering the purchase of a second Windcube v2 and power supply system.

We are happy to provide our systems for either outright purchase, or on a hire basis, which works well for a variety of clients.

As we produce more power supplies, our knowledge and experience grows, allowing scalability for global sales. We do all the engineering design, CAD drawings, control system, and communication system in-house, so once these aspects have been completed, we can easily improve on these for future systems.

Thanks to its ability to capture precise measurement data from all points of a wind turbine's blade-swept area, Windcube Lidar has become recognized as the market standard for superior performance for both wind resource assessment and wind farm performance monitoring. For more information about NRG Systems’ and Energy3’s Windcube + remote power supply solutions, please contact sales@nrgsystems.com.