An industry in jeopardy...

... and what ever happened to common sense?!


Two weeks ago I returned from the wind industry’s big show, WINDPOWER 2012 in Atlanta. I’ll talk more about my experience in a moment, but on my way the 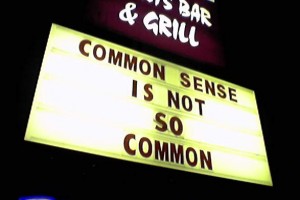 re I read the current issue of my old High School magazine. This nostalgic exercise – accentuated by a feature on school alumna, the Duchess of Cambridge (Kate Middleton to her school chums) – got me to thinking about Queen Elizabeth’s Diamond Jubilee and how life has changed over the last 60 years.

The magazine also featured an article that quoted some old boys lamenting recent changes. Most significantly, the school is revoking its Primary Rule: “If what you are thinking of doing defies common sense, do not do it.” Apparently, in this modern world, common sense is no longer relevant. Even in jolly old England the plea to use common sense can lead to misunderstanding and litigation.

Now back to Atlanta… At WINDPOWER this lack of common sense was in full display. The PTC has bipartisan support in both Houses of Congress, the President is behind it, Karl Rove supports it, the Treasury gains revenue from it, and 75,000 jobs have been created by it (not to mention the ancillary jobs in travel, transportation, finance, food, etc.)

So when asked why the PTC is not being quickly renewed, no-one has the answer. It defies common sense, one person told me. Sixty years ago this might have been reason enough to act, but not in the complicated, self-centered world we have created, which is particularly manifest in political short sightedness.

The show was, not surprisingly, downbeat. There were a lot of products and services for sale, and far fewer buyers than a year ago. The good news is that the wind industry is getting more and more efficient. Wind is now cost competitive with all energy sources, except for natural gas, and we will be competitive with gas once the market moves to a more sustainable pricing level. The efficiencies at the front end of the development cycle (e.g., turbine and logistical costs) are now moving into the operating area (e.g., improved capacity factors), and will quickly move in to the performance and maintenance area (e.g., power performance and predictive heath monitoring).

For all of us in the industry, the long term looks excellent. The challenge is to get through the hiatus in the US, caused by the daft lack of action on the PTC. This has to pass at some point if Congress wants to prevent the industry from fleeing overseas.