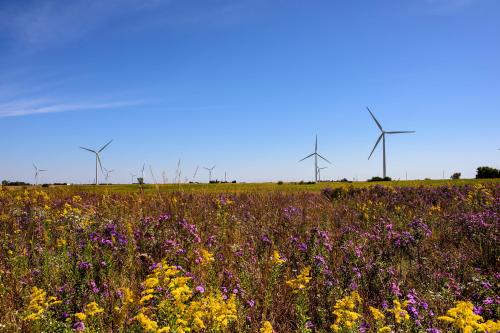 Hinesburg, VT, USA – A trial of NRG Systems’ Bat Deterrent System at the Pilot Hill Wind Project in Illinois yielded an overall reduction in bat fatalities of 67 percent, and greater reductions with species commonly affected by wind projects. The results of the trial were announced on March 27, 2019, by EDF Renewables, the developer/owner of the Pilot Hill Wind Project, at the AWEA Wind Project Siting and Environmental Compliance Seminar in Albuquerque, New Mexico. Located in Kankakee and Iroquois counties, the 175MW Pilot Hill Wind Project was made possible by a 20-year power purchase agreement with Microsoft Corporation and has been in commercial operation since 2015.

Testing of NRG’s ultrasonic acoustic Bat Deterrent System was conducted at Pilot Hill between August and October of 2018. Fifteen out of the facility’s 103 turbines were outfitted with Bat Deterrent Systems. A 5.0 m/second cut-in speed curtailment was simultaneously applied at the deterrent-equipped turbines. Michael Azeka, Director, Environmental Strategy at EDF Renewables, said, “Our goal with this trial was to gauge the efficacy of combining curtailment with NRG’s Bat Deterrent System to reduce bat mortality at wind turbines. The results of this trial are very encouraging and suggest that this approach to minimizing bat impacts is a compelling one for the wind industry.” There are several bat species present at Pilot Hill, including multiple migratory tree species. The testing revealed a significant reduction of 72% with Silver-haired Bats, 71% with Hoary Bats, and 94% with Big Brown Bats. Eastern Red Bats proved harder to deter, with 58% reduction in mortality for the two treatments together.

At the moment, raising cut-in wind speed is the most widely used method for reducing bat mortality at wind turbines. While effective, many wind plants in North America experience a significant loss of energy production when this curtailment is implemented. Brogan Morton, Senior Product Manager at NRG Systems, said, “The Pilot Hill trial is especially encouraging because it suggests that we can minimize bat impacts while increasing the amount of energy produced at wind plants struggling with this crucial issue. This is a win for all parties involved, including developers, conservationists, and, most importantly, the planet.”

The Pilot Hill trial was preceded by a two-year study at the Los Vientos Wind Energy Facility in Texas, which saw an overall reduction in bat fatalities of 54 percent. NRG’s Bat Deterrent System is currently available in North America. The company plans to hold trials of the technology in Europe in 2019.

NRG Systems, Inc., a subsidiary of ESCO Technologies Inc. (NYSE: ESE), revolutionized the way wind resource assessment was done more than 36 years ago. Today, this heritage of innovation drives everything they do. The company is dedicated to designing and manufacturing smart technologies for a more sustainable planet – that means more renewable energy, cleaner air, and a safer environment for all. Their measurement systems, turbine control sensors, Bat Deterrent Systems, and Lidar remote sensors can be found in more than 170 countries. For more information, visit nrgsystems.com.

EDF Renewables is one of the largest renewable energy developers in North America with 16 gigawatts of wind, solar, and storage projects developed throughout the U.S., Canada, and Mexico. For more information, visit edf-re.com.